Following the Government announcement on Saturday 31 October, we are deeply disappointed to confirm that community netball will be suspended until the national lockdown, coming into affect on Thursday 5 November, is lifted. All community netball following the Return to Play Roadmap is impacted including club activity, leagues, local pathway activity and all England Netball programmes including Back to Netball and Walking Netball. Activity operating as part of the elite sport framework is however permitted to continue.

This news means we are now temporarily at stage one of our Roadmap. 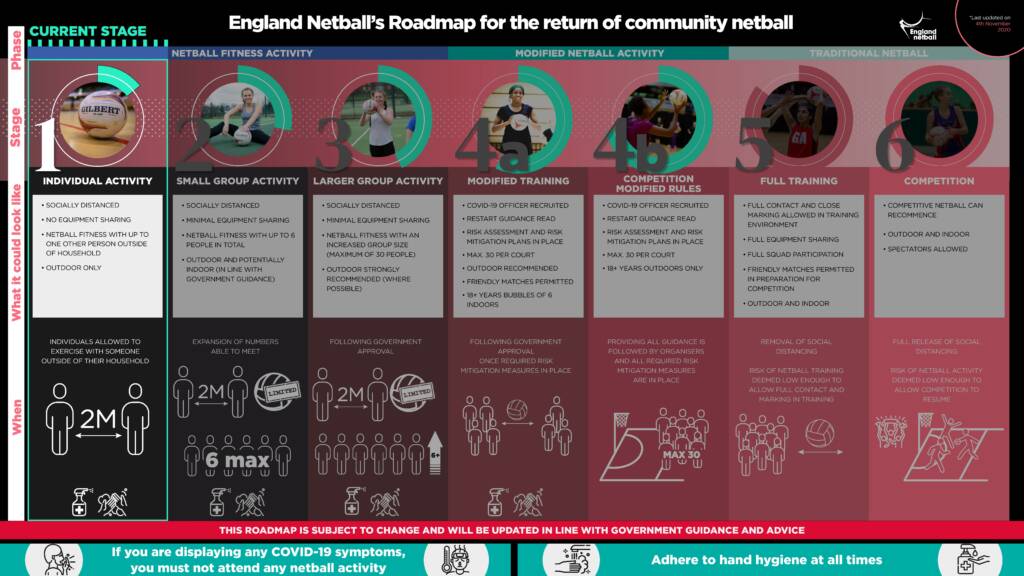 The efforts of the Netball Family since the Government signed off our Return to Play plan in August have been inspiring. England Netball are immensely proud of the huge amount of care and attention the Netball Family has taken to ensure that the virus isn’t spreading through netball activity. We sincerely thank the committees and COVID-19 Officers who interpreted the guidance and developed risk mitigation plans, the coaches who’ve carefully planned sessions, the officials who have implemented the modifications, and every single player who has stepped back onto court. The opportunity to play even for a few short months will have meant even more after these difficult times for so many.

During this second lockdown, we will do everything we can to give the Netball Family what you love most; netball! Throughout the pandemic, the Virtual Netball Club (VNC) has continued to run exclusively for members so that you can keep fit, active and connected to our sport. Whilst the thought of another lockdown is going to be tough on so many, rest assured that we will do all we can to keep you entertained and engaged via this platform throughout this time. We will be running even more virtual netball sessions including fun junior sessions, exclusives with the Vitality Roses and much more. We’re kicking things off with a Bonfire Night extravaganza on Wednesday 4 November, plus keep your eyes peeled for upcoming VNC emails. The VNC is one of many great membership benefits, click here for more information.

We are currently anticipating a return to court in early December for community netball and whilst this is likely to be under the tiered system, this won’t keep us away for long. We will continue to update the website and Care Package as we know more, communicate with COVID Officers and run forums to support netball organisations and COVID Officers, coaches and officials.

We thank you for supporting netball through these challenging times. We are so grateful to have you on the team and will continue to do all that we can to support you, entertain you, and fight for you – and the sport – during the pandemic, and beyond. When we can return, this time we already know which facilities are available, risk assessments and mitigation plans are written and players know what they are doing. So, we will be back on court in no time.

Government lockdown and what this means for community netball