Vitality Rose Eboni Usoro-Brown takes us inside her new adventure in Australia with the first instalment of her new diary.

Up for discussion – the reasons behind her move, settling into her new team, the season ahead, her daughter Savannah’s support as a gym training partner and making the most of Queensland…

It has been an adventure from the moment that we got here. Obviously, I’ve been over here before from 2012 to 2015, however, I think when you’re travelling with your mum and your little girl, your family, and moving all the way across to the other side of the world, it was always going to be a little bit daunting.

But I’m really, really grateful because we had such a warm welcome from everyone at the Queensland Firebirds HQ and in turn the Queensland community who have really accepted us, opened their arms and helped us settle in.

It was a huge decision and one that I definitely didn’t take lightly. I’ve been part of Team Bath since I was a young athlete and I’ve always known it as home. 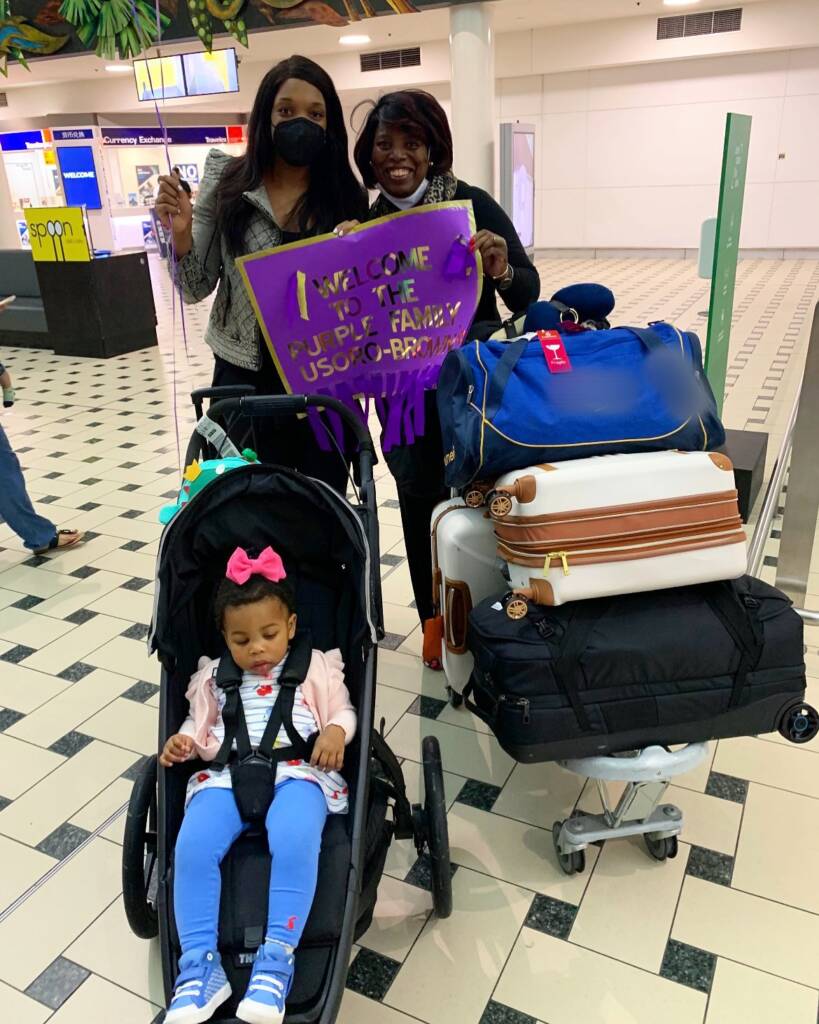 Having come back to the franchise in 2015 after my initial stint in Australia, having captained the team for six seasons, especially last season after having Savannah and their support in terms of helping me get back onto court and then obviously reaching a Grand Final, I tore my hair out over the benefits against the disadvantages when the opportunity to join the Queensland Firebirds came up.

I mentioned to Anna [Stembridge, Team Bath Head Coach] back in July and Jess [Thirlby, Vitality Roses Head Coach] when she invited me back into the Vitality Roses camp last August that I had ambitions to put my best foot forward for selection for the Commonwealth Games; so it was about weighing up as to whether I should step out of my comfort zone of playing in the Vitality Netball Superleague to take up this opportunity, to really challenge myself, by stepping into the unknown.

To play and train daily, against some of the opposition I may face if selected for the Commonwealth Games like Gretel Bueta, who’s the current starting Australian Diamonds goal shooter and who is currently in the Queensland Firebirds team, and, before I knew she was pregnant, Romelda Aiken-George, one of the Jamaican Sunshine Girls was an opportunity I had to really consider.

So I made the decision to go, even though I had a lot of doubt as to whether I was doing the right thing! A lot of conversations backwards and forwards were had with the franchise, my husband, my mum, and even with Savannah!

It truly was one of the hardest decisions I have made in my career. Team Bath will always have a special place in my heart, but on this occasion we as a family decided to take a leap of faith.

Adapting to the new setup

The first thing to get over [upon arrival] was a 24-hour flight with a one-year-old. Savannah lulled me into a false sense of security on the first flight because she was good as gold and then on the second one, she screamed for about half the time that it took to get to Australia!

Once we got over that, do you know what’s been really awesome? Meeting the squad and the team behind the team. From the moment I walked in to Firebirds HQ, you could sense the real infectious energy and positive vibe at the club. Gretel and Kim Ravaillion both have one year olds too, so it’s great to have teammates in the same position as me.

It’s been wonderful in the same sense that Megan Anderson, our Head Coach, and Clare Ferguson, our Assistant Coach, again have children so they have a level of understanding in terms of how I’m approaching training and coming into it as a mum and all the different things that go in and around off the court which potentially might impact my on-court performance.

With training mostly early in the mornings, I’ve largely had the afternoons free to spend time with mum and Savannah which has really lent to my positive outlook and I’m really enjoying the environment.

Making the most of Queensland

One of the most enjoyable experiences has been getting to know Queensland.

I have fond memories of being here on the Gold Coast in 2018 but I think when we came over this time, we said we were going to come to Suncorp Super Netball (SSN) and enjoy this experience for all that it was on and off the court. 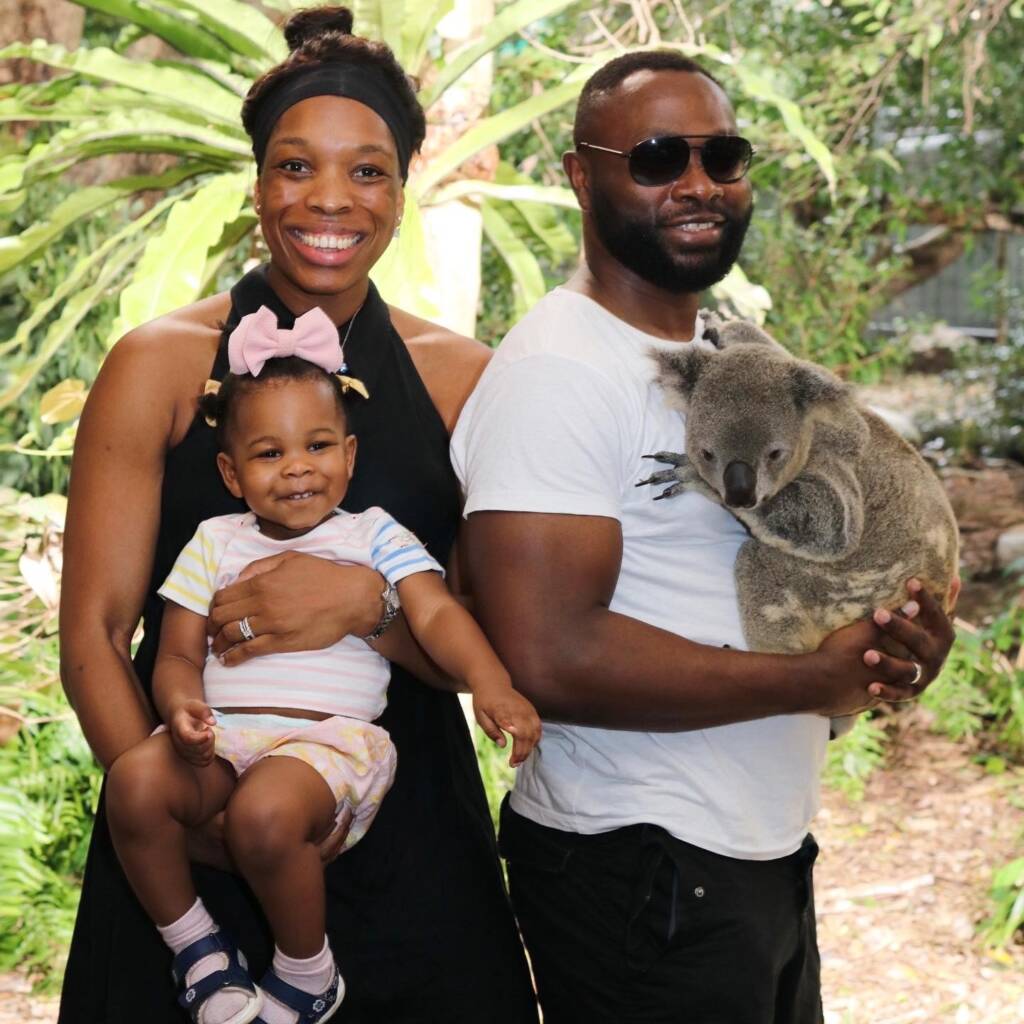 I love to explore, and I’m a real adventurer at heart, so when JK (my husband) came over to visit we made it our mission, in my downtime, to really throw ourselves into getting to know Queensland and Brisbane in particular. So we’ve held koalas, fed kangaroos, climbed the Story Bridge and visited some of the most spectacular viewpoints.

Every day has been different and again, I’m just thankful to have this opportunity to be able to spend more time with my family and make memories, whilst playing a sport that I love.

JK is in the Royal Air Force and he needs to be readily available for military duty, so mum is here in Brisbane with me, to help with Savannah, for the duration of our stay. To be fair, my mum didn’t take much persuading [to come with us] when I placed the idea past her last September! She was just like ‘how many suitcases can I bring? One case or two?’.

It’s been wonderful to see her bond develop with Savannah and she too has been able to share in a lot of her firsts. Mum has got a permanent smile on her face and it’s just so wonderful.

As human beings in general we don’t necessarily like change and in terms of the person I am, I’ve experienced a lot of change in a short space of time! 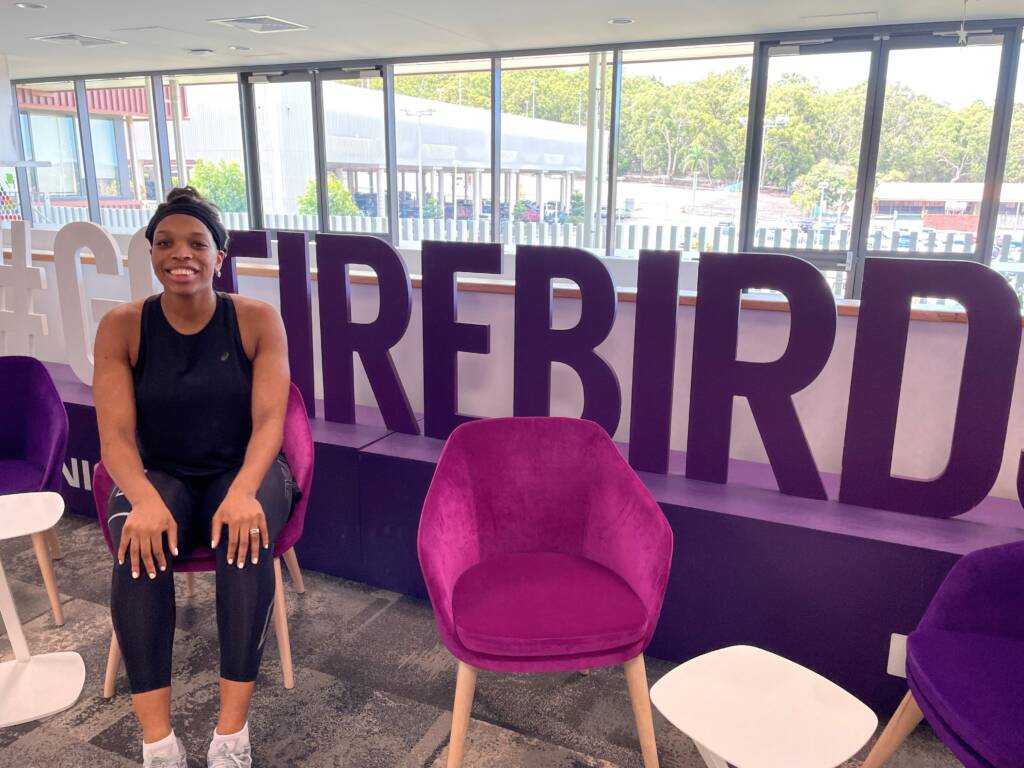 I always knew coming to this Australian environment, it was going to be a high-performance environment, the level of expectation was always going to be high especially when joining a club that is steeped in a history of success.

What I’ve also found is I’ve sprinted more than I’ve ever sprinted in the last eight weeks! I’ve laughed, I’ve sweated, especially in the sub-tropical climate, but I’ve really enjoyed getting to learn about their philosophies here at the Queensland Firebirds, their ethos, what makes people tick but also what their ambitions are.

They’re a highly ambitious club and that’s something I like. I’m a very driven and resilient individual so to be in this performance environment surrounded by world-class staff and world-class athletes and getting challenged every single session is what I ask for.

I guess, being honest, some days are tougher than others but actually sitting here in game week one, I’m really proud of the journey that I’ve been on and will hopefully continue to have as the SSN competition starts.

Savannah gets distracted quite easily so we’ll start an exercise and then she’s off doing something else which is usually swiss ball orientated. Then she wanders back and wants to be picked up all the time and I’m like “Savannah, you’re not a weight – you’re meant to be my hype girl!”

But she’s loving running around and it’s great that I can bring her in, get my session done then continue with my day.

The Suncorp Super Netball season ahead and definition of success

I’m bursting with excitement for the season ahead! That’s more the feeling than anything else.

When I think to myself that I was journaling my ‘journey back to the court’ on my Instagram page at this time last year, who would have thought a year later I’d be sitting here in Queensland about to play an SSN season? Hard work truly does pay off.

I’m grateful and humbled to have this opportunity, but I’m also ready to attack it and contribute as much as I can to the team effort to bring home a Championship.

When I set out coming here, success initially was to challenge myself as much as I can from as skills and performance perspective, to genuinely test myself against the world’s best and to further develop my game knowledge, to allow me to put my best foot forward for Commonwealth Games squad selection given the depth of talent that’s currently in the Vitality Roses squad.

But it’s very much about the process and before we think about the Commonwealth Games, it is about the SSN season and for me personally, to have consistent performances game to game.

In the last three weeks, we’ve had a big emphasis at the Firebirds on building connections. I’ve never played with Kim Jenner or Ruby Bakewell-Doran before but our partnerships are really, really growing and that’s something I usually take pride in as a defender.

I’m known for being able to combine well in defensive partnerships, so I’m looking for that to grow as the season progresses and hopefully to just disrupt the flow of some of the competition’s attackers.

We’ve got a few training sessions left this week before we ease off a little ahead of captain’s run through on Saturday and then game day on Sunday.

Everyone’s in really good spirits and I can’t wait to don the purple dress and hopefully become Firebird number 104.

Four is my lucky number, so hopefully that will bode me well throughout the season!