The Roses are now national heroes and golden girls, but their journey to become Commonwealth Games champions wasn’t straight-forward.

The first match of their Commonwealth crusade against Scotland saw a dominant England side secure an emphatic 74-28 victory. This set the tone for their entire campaign and their intent to become gold-medallists from the get-go. The next four games followed suit, with England winning all of their Pool B matches and emerging from the preliminary rounds undefeated. Their third match against Uganda pushed them to the line and was closer than most expected.

However, it was the final pool game against world number twos, New Zealand that was the most hotly anticipated. The Roses looked strong throughout – clinching their fifth victory and ensuring their spot in the semi-finals.

However, the fans had only just had a taste of the drama that was still to come. England’s semi-final match against Jamaica was a blockbuster performance.

It had everything; an unbelievable comeback, extraordinary intensity, and a last-minute goal that secured victory.

The scenes just after the final whistle showcased the importance of the win. Victory was made even sweeter by the fact that in the 2014 Commonwealth Games, a last-minute goal by the Sunshine Girls knocked the Roses off the podium, wiping away their hopes of a medal. This time round, England defied history to come out on top – and with it, they were guaranteed at least a silver medal. Before this, they had only ever won bronze.

England entered their very first Commonwealth Games final against Australia with the belief they could do it. But they had their doubters – namely those looking at the history of these two nations, and the fact that England hadn’t beaten the Diamonds since 2013.

But, the final match between England and Australia took us to another stratosphere where the Roses put out their most consistent performance yet. Up until this point in the tournament, Australia seemed untouchable. They breezed through the preliminary stages without any other nation even coming close to challenging them. England did what no other nation could, breaking down the fluid play of the Diamonds and preventing them from working the ball down to their own shooting circle.

It was goal-for-goal throughout most of the game, however England went into the final quarter two goals down. They managed to claw their way back when the score evened out again with a few minutes on the clock. England took the final centre-pass of the game with the scoreboard tied at 51-all. A last-second penalty shot, netted by Helen Housby, ensured England made history all over again to become Commonwealth Games champions on the biggest stage of them all.

Throughout their Gold Coast journey, the Roses have displayed how much they’ve developed in the last two years as a result of England Netball’s full-time player programme.

Announced in June 2016, it provides the Roses with an optimum training environment, ensuring their preparations for major competitions, such as the Commonwealth Games, are world-class.

The success of this programme was also reflected earlier this year at the 2018 Quad Series where England finished as runners-up, beating New Zealand and South Africa to achieve their best-ever finish in this competition.

But none will forget the moment they became the golden girls of the 2018 Commonwealth Games.

The Roses have well and truly cemented their place in history.

WATCH – get tickets to be part of the Roses’ homecoming as they face Uganda this autumn! 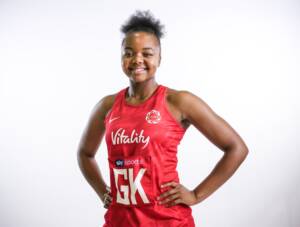