HAMILTON, NEW ZEALAND - OCTOBER 30: Sophie Drakeford-Lewis of England shoots during game 2 of the Cadbury Netball Series between the New Zealand Silver Ferns and the England Roses at Claudelands Arena on October 30, 2020 in Hamilton, New Zealand. (Photo by Phil Walter/Getty Images)

Today (10/12/20), we celebrate the birthday of Sophie Drakeford-Lewis as the Vitality Rose goal attack turns 22!

The shooter has enjoyed a stellar 12 months on the netball court for both club and country as her performances continued to capture the attention of the netball community.

In just over a year, the Team Bath Netball made the squad for three major competitions including the South Africa Series, Vitality Netball Nations Cup, and the Cadbury Netball Series.

Sophie gained particular praise for her level and consistency of performance against New Zealand in October and November. She netted 23 goals and provided 26 goal assists against the Silver Ferns in England’s return to competitive netball.

The series brought her 21st year to a spectacular end but, for the youngster, her substantial court time came as a shock to her. Speaking to Zara Buck on Virtual Netball Club show Netball Natter, Sophie said:

“It was an incredible experience to be able to play the first international test matches since the first lockdown. It was an amazing experience and we’ve learnt so much from it.

“For me, I wasn’t really expecting to get on court at all so when I was told that I was going on after that first quarter in that first game I was extremely nervous and shocked. I just wanted to make the most of the opportunity I was being given.

“The support from back home was amazing, we all really appreciated the support we were getting having been so far away. I definitely got a lot of stick about the early starts [mainly from family] because of the time difference, but the support was incredible!

“That first game was particularly special because obviously it was Imogen Allison’s first cap and I got to be out there with her. As a Team Bath teammate, that was really special. There was also Serena Guthrie’s 100th cap the following match which was also really special. Celebrating those two special moments was really nice.”

Without doubt an international test series to remember 🌹We had many challenges along the way but very proud of what we put out there over the past week! ❤️ Huge thanks to @NetballNZ, @SilverFernsNZ and @EnglandNetball for making it happen 🙌🏻 See you soon England ✈️ pic.twitter.com/gind7uVmWl

The good news continued for Sophie who announced that she would be returning for another Vitality Netball Superleague (VNSL) campaign for five-time champions Team Bath in 2021.

The current VNSL Young Player of the Year has been a standout star in the division for several years having scored 284 goals for Saracens Mavericks at the age of 18 in 2017.

Sophie joined her current side shortly after and has followed in the footsteps of her idol Pamela Cookey in being one of the first names on the team sheet for the Bath outfit.

“I grew up in Berkshire and went to school in Reading. I absolutely loved sport at school, I would do anything. My PE teacher suggested that I started at Woodley Netball Club because I loved netball, it was one of my favourites, and I just joined with a couple of friends from school. It was a good opportunity to play outside of school with my friends,” she said.

“At the time, I was also playing a lot of tennis which is really individual so it was really nice to have that team sport to play on Wednesdays and the weekends. I started there and played with some of the girls from nine until 16 so I made some really good friends. 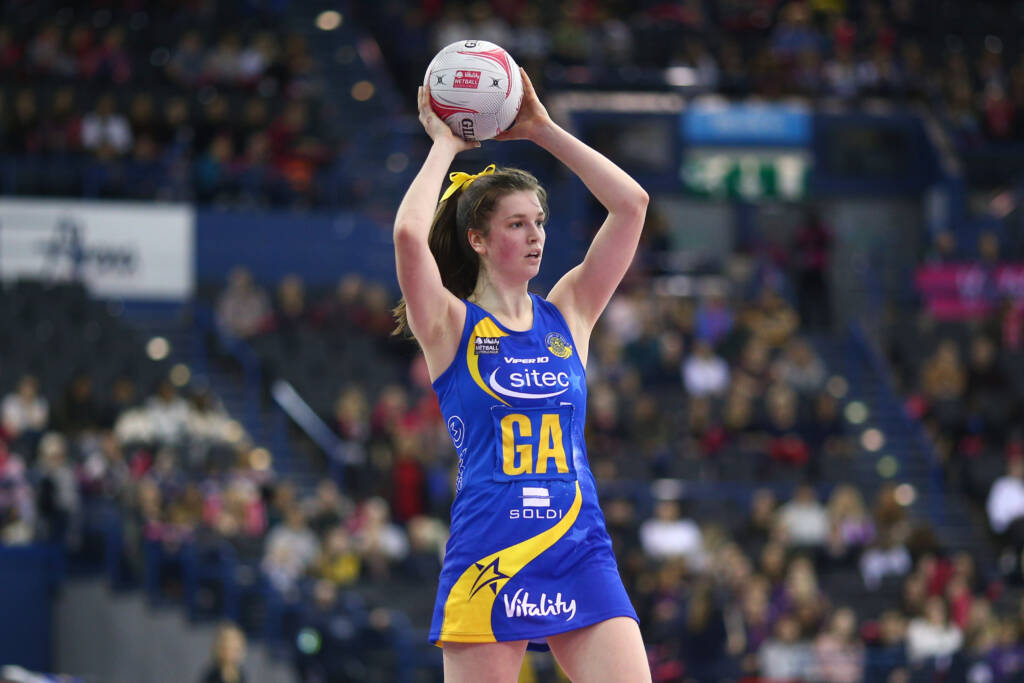 “I was extremely lucky that I had such supportive netball coaches along the way which allowed me to continue playing both sports. I was able to keep it going while still pursuing tennis. It wasn’t until I was 17 that I had a back injury and I had to make a decision because I was just doing far too much. It wasn’t until I was 17 that I decided I was going to pursue netball and make that my main focus.”

The conclusion of the 2020 season might have deprived us of Sophie’s best league season to date but the goal attack is ready to make the most of her opportunities on court.

Sophie, who balances her netball with her Integrated Mechanical & Electrical Engineering degree, says that her aim for the future will be to head to a Netball World Cup or Commonwealth Games with the Vitality Roses.

“It was such a shame that the 2020 season was cut short, but things are looking really exciting ahead of 2021 so I can’t wait to start.

“I’m taking every year as it comes and trying to make the most of every opportunity that I’m given. I’d love to play at a Netball World Cup or a Commonwealth Games but I just have to see where netball takes me.”