Manchester Thunder's U17, U19 & U21 teams after winning the NPL season. Credit: Morgan Harlow

Following this weekend’s final rounds at the University of Nottingham, the Netball Performance League 2021/22 season has come to a close with the winners and final standings of the U17, U19, and U21 competitions now decided.

After finishing the season in first place, Manchester Thunder were crowned league winners of the U17, U19 and U21 competitions.

Upon the completion of the league, all teams were then entered into a play-off style tournament with awards given to the winners of the final.

The preliminary rounds of this competition saw teams split into two groups, each team within their group faced each other once to determine this weekend’s final stage fixtures.

After four quarters, it was Severn Stars who took the win, the score 27-61.

Third place sides Wasps and Saracens Mavericks battled it out in an end-to-end performance which saw Mavericks take the win, finishing the game 40-54.

Leeds Rhinos took to the court against Surrey Storm in their Saturday afternoon fixture. Both teams displayed skill and determination but it was Rhinos who came out on top, ending the match with the scoreline 52-46 in their favour.

Top of the Group A table Manchester Thunder took on Group B leaders London Pulse in a long-awaited matchup. After an intense hour of action, it was Thunder who swept the victory, pushing the final score to 53-49.

The results of this fixture meant that Manchester Thunder secured their spot as NPL U17 champions. 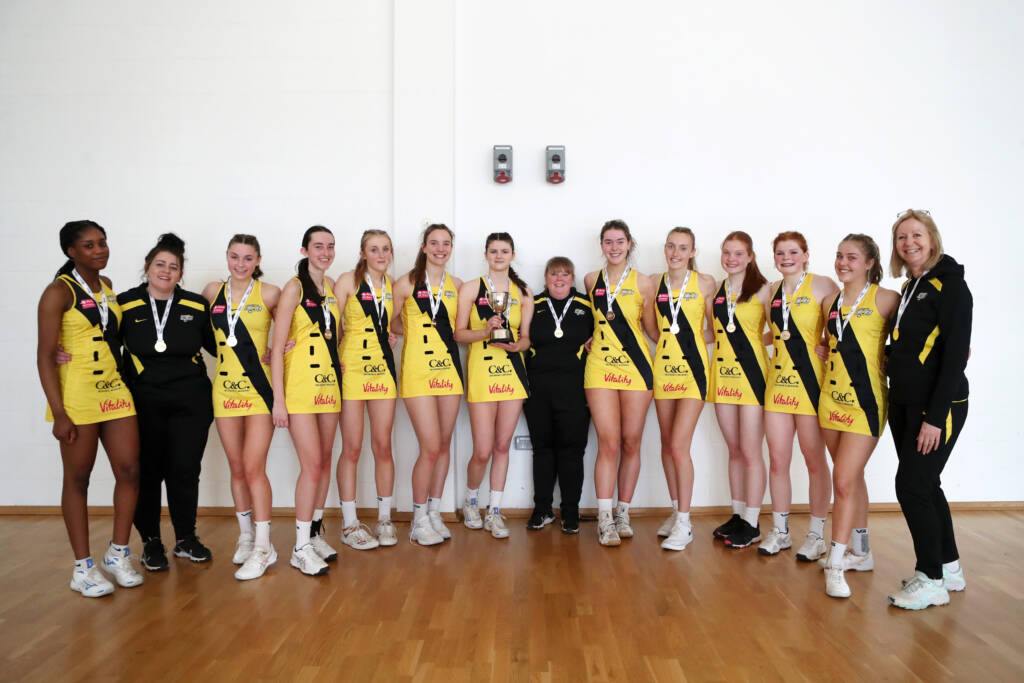 Manchester Thunder U17 side pictured with their trophy and winners medals – 10/04/2022 – Credit: Morgan Harlow

The U17 final standings are as follows:

The NPL U17 Player of the Year trophy was awarded to Darcie Everitt (London Pulse). 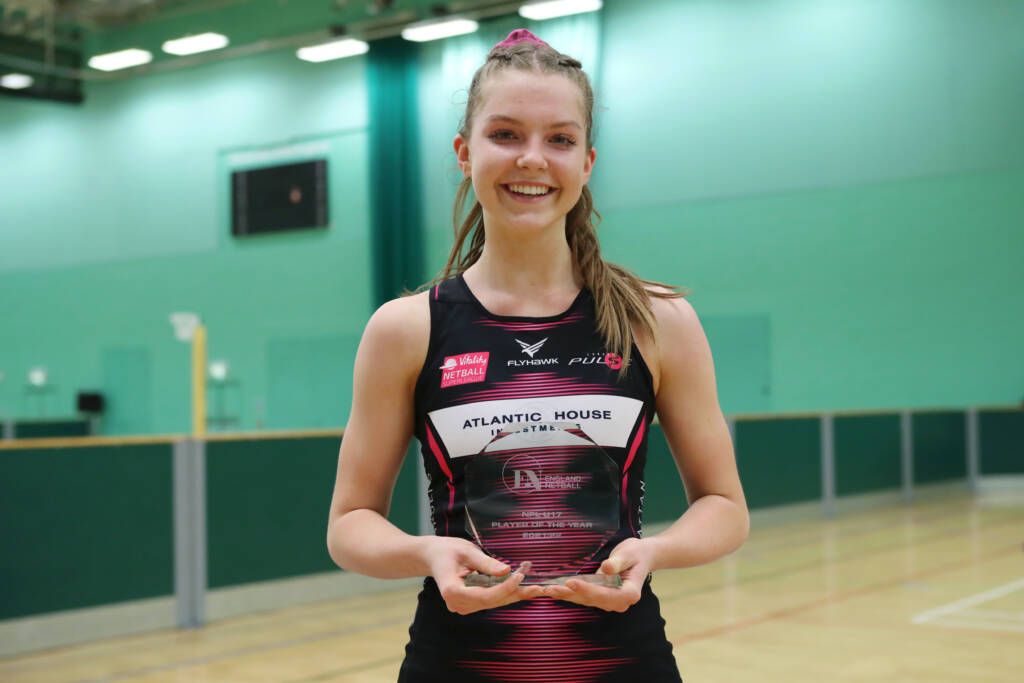 Following the end of the NPL season, teams were invited to take part in a play-off style competition, giving them the opportunity to face off once again and another shot at success.

The U17 competition began with two 9:00 am fixtures, Saracens Mavericks versus Wasps and Team Bath against Severn Stars.

Saracens Mavericks came out on top in their fixture after securing a 41-53 win over Wasps.

Team Bath took the victory in their matchup with a 62-40 win against Severn Stars.

Manchester Thunder faced Surrey Storm in a display that saw Thunder take the win, thanks to a 62-48 lead at the end of the fourth quarter.

London Pulse and Leeds Rhinos put on an end-to-end performance in a tense fixture that saw  Rhinos steal the victory, they led by three goals at the end of their match which ended 53-56.

Saracens Mavericks faced Loughborough Lightning, there was little to split these two sides but after four quarters of end-to-end action, Mavericks came out on top, securing a 44-37 win.

Team Bath’s encounter against North East ended with a 54-43 victory for Team Bath.

After a high-energy display, Wasps secured victory over Loughborough Lightning, finishing the match with a 59-38 lead.

Severn Stars defeated North East in their clash, a 56-39 victory saw them take the win.

In the quest for third place, it was London Pulse who came out on top, after four quarters of action, they were able to establish an eight-goal lead over Surrey Storm which saw them secure the win and earn them third place in the tournament (39-47).

Manchester Thunder and Leeds Rhinos took to the court in an epic final fixture, after a sixty-minute end-to-end display, it was Rhinos who were able to secure a narrow victory, they  ended the match 61-63 and finished the tournament in first place.

The U17 Playoffs results are as follows: 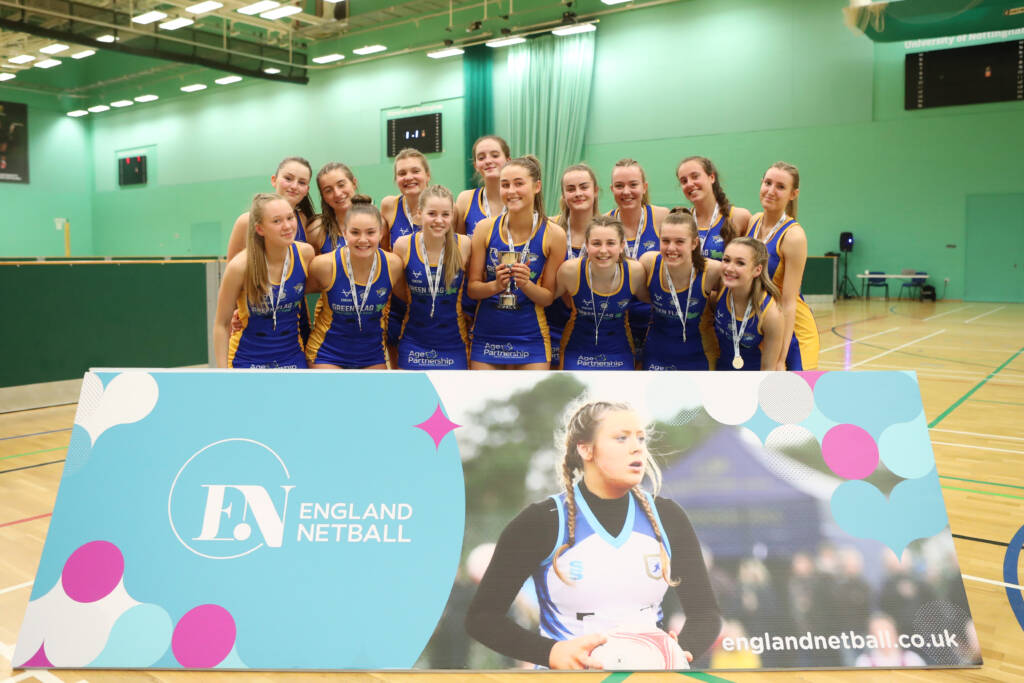 Saturday’s final round saw all ten teams take to the court to decide the season’s final standings.

In their morning fixture, Team Bath Netball took victory in their match against London Pulse. Team Bath secured the win after pushing the scoreline to 51-38.

Manchester Thunder were successful in their fixture against Severn Stars, after a high-intensity showcase, they led 54-42.

Following an end-to-end performance, Loughborough Lightning came out on top against Leeds Rhinos after securing a 51-57 victory.

Saracens Mavericks took the win against North East, at the end of four quarters, they were ahead 56-37.

Surrey Storm faced Wasps in a close matchup which saw Wasps sweep a narrow victory, they led by three goals at the end of the match (50-53).

Following the results from this final round, Manchester Thunder were crowned NPL U19 champions, completing their season with eight wins and one loss to their name. 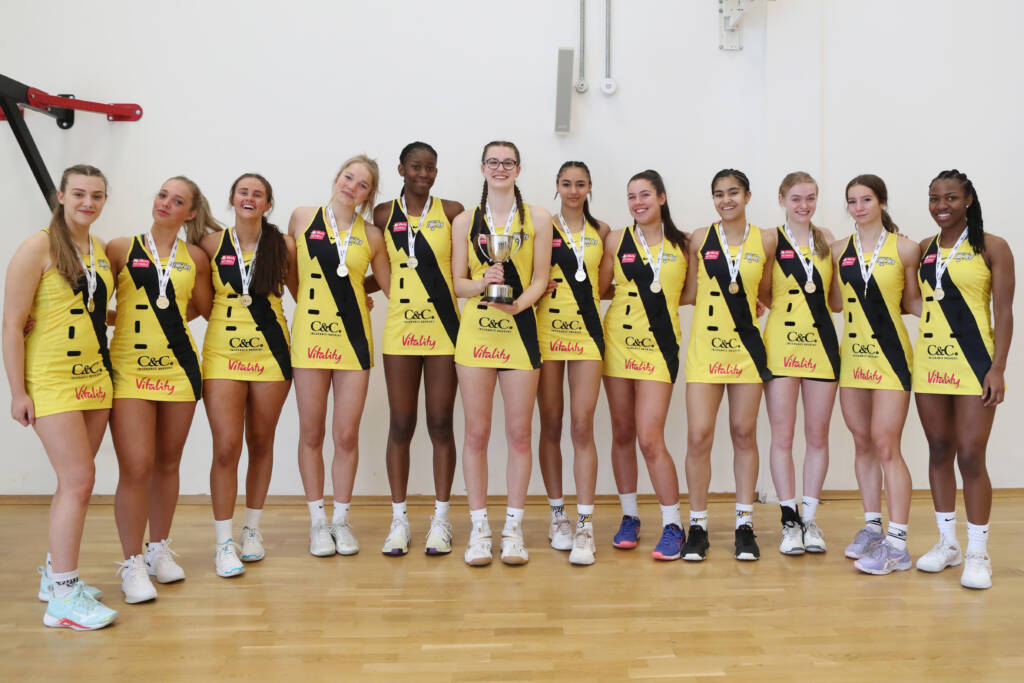 Manchester Thunder U19 side pictured with their trophy and winners medals – 10/04/2022 – Credit: Morgan Harlow

The final U19 standings are as follows:

The NPL U19 Player of the Year trophy was awarded to Ruby Parker (Manchester Thunder). 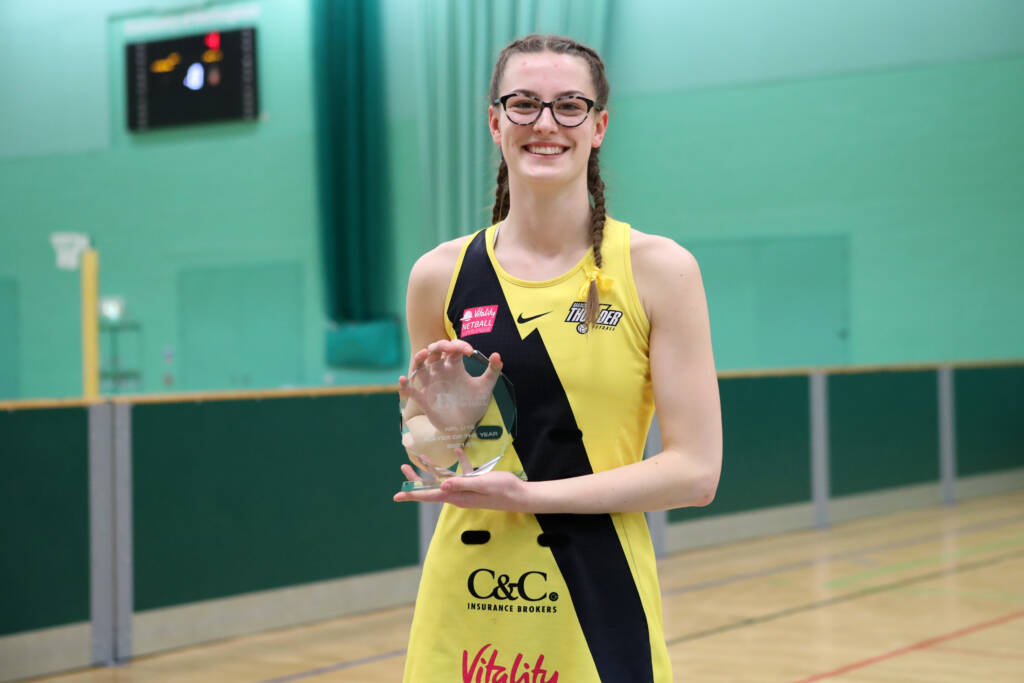 Saturday evening saw the first matches of the U19 playoffs take place, Manchester Thunder faced Surrey Storm and after 60 minutes, the score was 54-42 in favour of Thunder.

Severn Stars were beaten in their match against Leeds Rhinos, both teams displayed impressive skill and determination but it was Rhinos who proved themselves after leading by six goals at the end of the fourth quarter (49-55).

Wasps gave a high-scoring performance in their fixture against Saracens Mavericks, they put away 66 goals to secure their win (66-38).

Team Bath were successful in their campaign against Loughborough Lightning, after an end-to-end display, they finished their match 45-39.

On the second and final day of the competition, Loughborough Lightning successfully dispatched London Pulse after they secured a 53-35 victory.

Severn Stars were also successful in their fixture after proving themselves in a 51-43 win over North East.

Team Bath secured a narrow victory over London Pulse in a close matchup that ended 40-37 in their favour.

Leeds Rhinos and North East battled it out in their fixture, after a high-intensity 60 minutes, Rhinos came out on top, securing themselves a 59-37 win.

In their clash for third place, Surrey Storm swept victory against Saracens Mavericks, both teams were determined to secure the win but after four quarters of action, the final score was 60-44 in favour of the Surrey side.

In the match to secure first place, Manchester Thunder came out on top against Wasps, after an end-to-end showcase Thunder ended the fourth quarter with a five-goal advantage, the final score 50-45 crowned them winners of the U19 tournament.

The U19 playoff results are as follows: 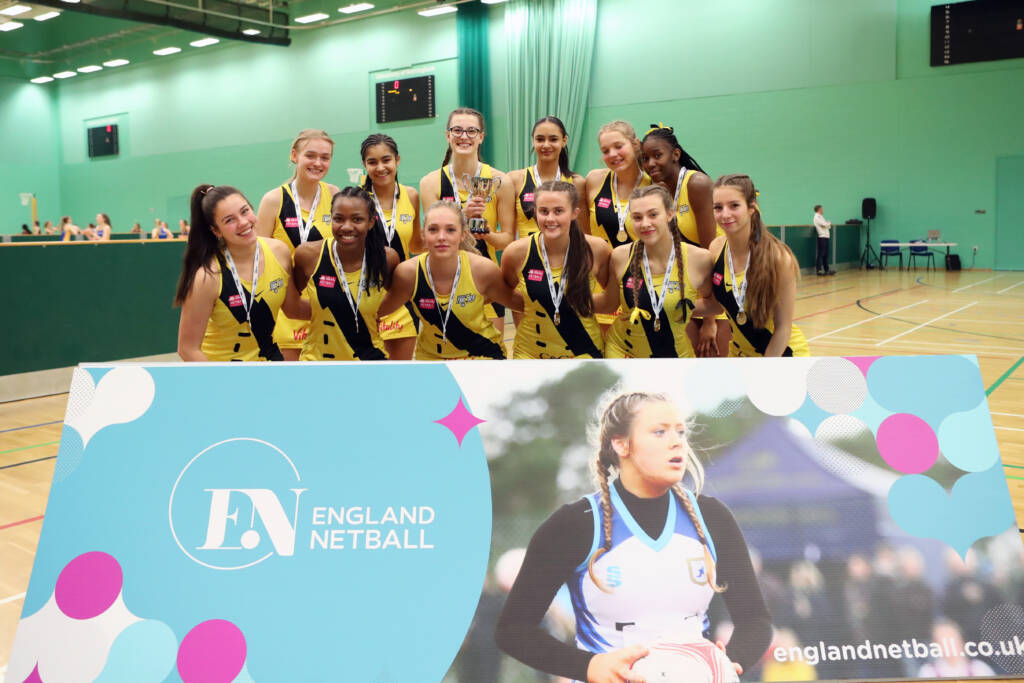 Manchester Thunder proved themselves after securing a high-scoring 70-33 win over Severn Stars.

In a high-energy matchup, Loughborough Lightning pushed the scoreline in their favour and earned themselves a 57-37 victory over Leeds Rhinos.

Saracens Mavericks came out on top in their fixture against North East, after 60 minutes of action, the score was 59-45 in their favour.

Team Bath were the winners of their matchup against London Pulse a 53-37 win saw them take the victory.

Following the results from this final round, Manchester Thunder are crowned NPL U21 champions. 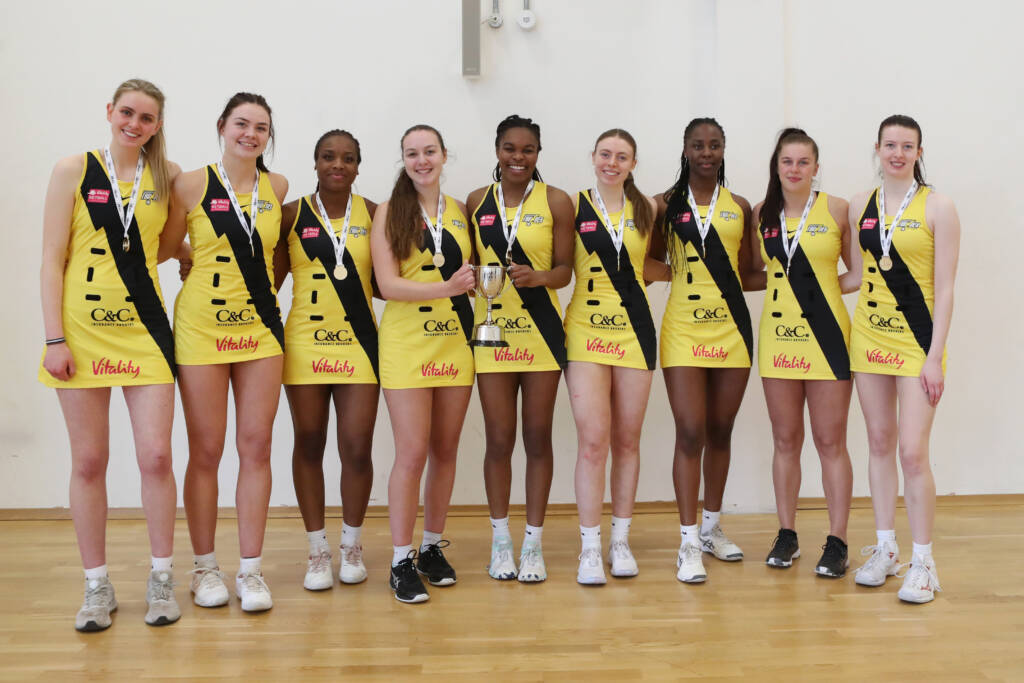 Manchester Thunder U21 side pictured with their trophy and winners medals – 10/04/2022 – Credit: Morgan Harlow

The U21 Final standings are as follows:

The NPL U21 Player of the Year trophy was awarded to Savannah Dada-Mascoll (Manchester Thunder). 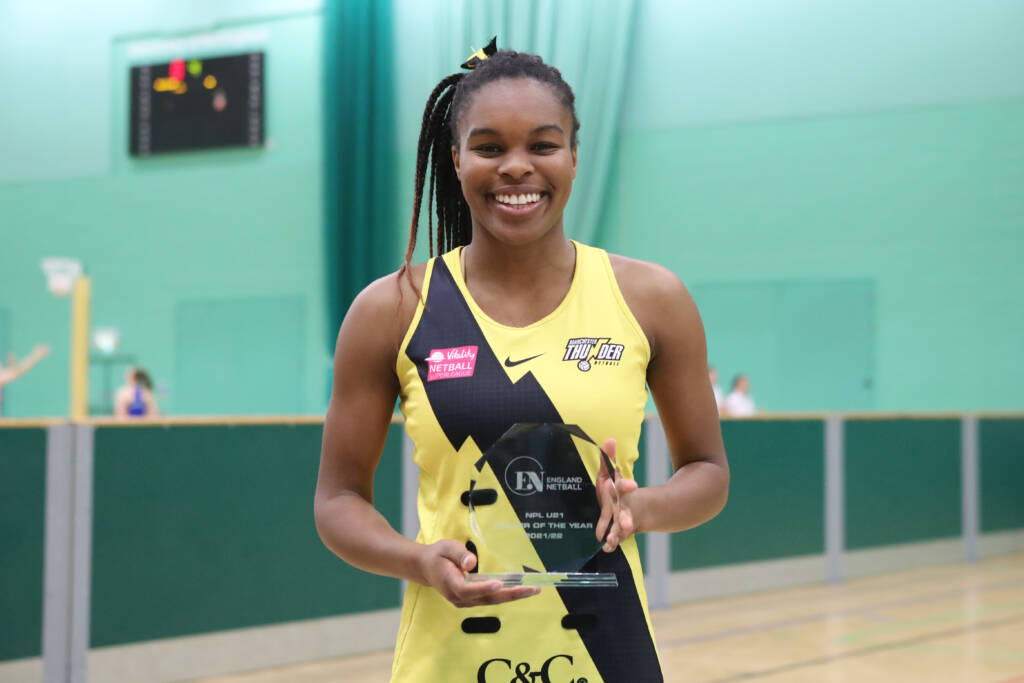 The U21 playoffs began with a Saturday evening meeting between Manchester Thunder and Loughborough Lightning, a close encounter which saw Thunder come out on top, the match finished 48-41.

Surrey Storm and North East left it all on the court in their encounter, after four quarters of non-stop action, it was Storm who took the win, securing a 68-52 victory.

London Pulse swept the win in their fixture against Team Bath, both sides played with passion and determination but it was Pulse who came out on top after pushing the scoreline to 47-40.

In a high-scoring showcase, Saracens Mavericks struggled to hold back Leeds Rhinos, Rhinos put away 67 goals in this fixture and ended the match with a 20 point lead (47-67).

Sunday’s action began with a meeting between Saracens Mavericks and Wasps, after an intense 60 minutes, it was Wasps who proved themselves, establishing a 41-53 lead which saw them take the win.

Surrey Storm were successful in their fixture against Severn Stars, a 58-48 lead at the end of the fourth quarter earned them victory.

Leeds Rhinos took the win in their matchup against Wasps, a 56-36 lead at the end of the fourth quarter saw them secure victory.

Severn Stars were the winners of their fixture against North East, after 60 minutes of high-scoring action, they led by ten goals (61-51).

In the fixture to determine third place,Team Bath came out on top against Loughborough Lightning, at the end of the fourth quarter, they had built themselves an 11 goal advantage, finishing the match 41-52 and earnt themselves third place in the tournament.

The matchup to decide first place saw Manchester Thunder and London Pulse take to the court, both teams started quickly from the first centre pass, displaying agility and expert vision.

The fixture continued with not a lot to split the two sides, they went goal-for-goal for the majority of the match but it was Pulse who were able to pull ahead, they held off Thunder for the remaining minutes of the match to secure a 40-46 win which secured them first place in the tournament.

The U21 playoffs results are as follows: 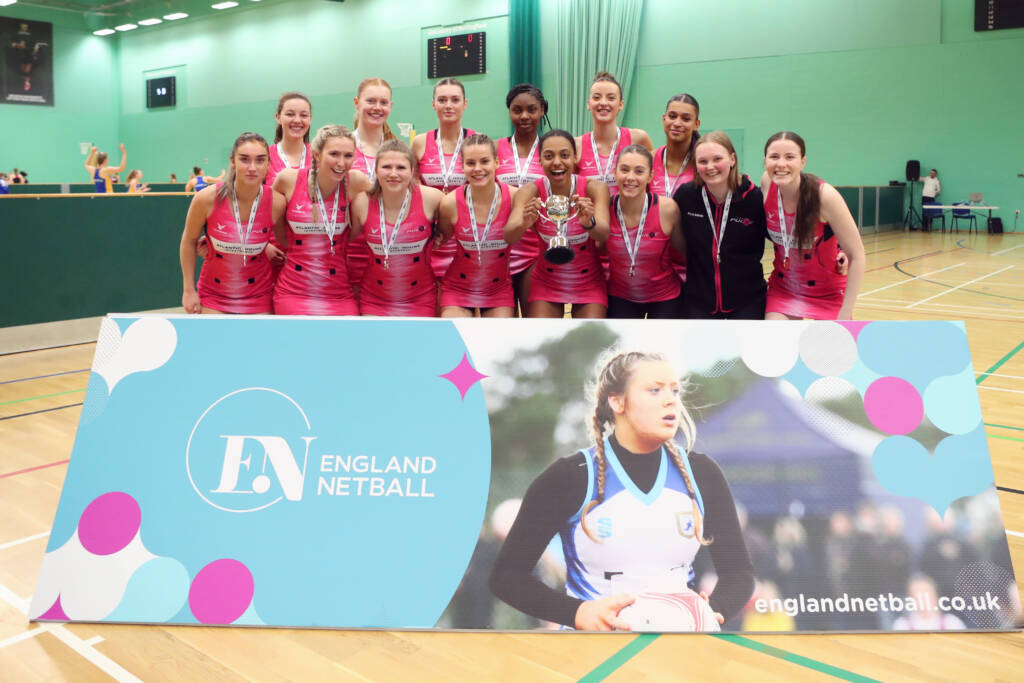 England Netball would like to take this opportunity to say thank you to all teams, officials and volunteers for their hard work and support this season.

Previous Story NPL results to be concluded this weekend
Next Story Vitality Roses in Focus: VNSL Round 12, ANZ Round Five & SSN Round Three