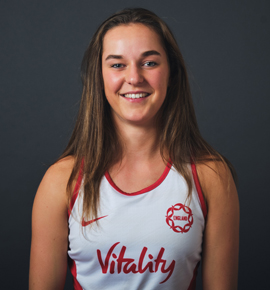 Ally Housley is another young English defender making a name for herself in the game due to her performances for her country and franchise.

For England, Housley was selected for her first senior international competition in the form of Netball Europe Open in 2019 and played in her country’s opening match against the Republic of Ireland.

This comes after her inclusion in the U21 long squad for the World Youth Cup in 2021 and an U19 tour of Australia and New Zealand.

Housley joined Surrey Storm from the London and South East Regional Performance Academy in 2015 and she was quickly inducted into that season’s NPL squad alongside Vitality Roses Fran Williams and Sophie Drakeford-Lewis.

She has since joined Wasps Netball and became part of the franchise’s Vitality Netball Superleague squad for the 2020 season. The youngster also took part in Wasps’ British Fast5 All-Stars team in 2019, where she reached the final.