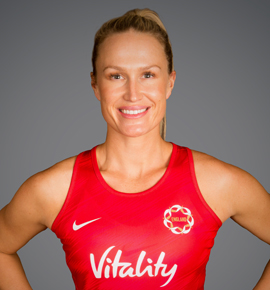 Chelsea Pitman is an Australian-born netballer who received her first cap for the Vitality Roses in January 2017 against South Africa after previously competing for Australia. Thanks to her Yorkshire-born father she traded sides in 2017, going on to be a part of the 2018 Commonwealth Games winning team and 2019 Vitality Netball World Cup squad.

She is predominantly a wing attack, but can also play goal attack. She currently plays for Adelaide Thunderbirds in the Suncorp Super Netball in Australia.