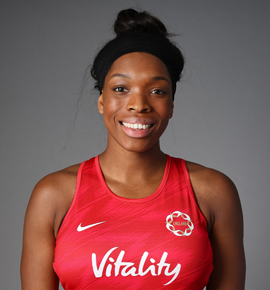 Eboni Usoro-Brown is one of the most decorated and well-known members of the Vitality Roses. The defender has been enjoying a long and prosperous career on court for her country ever since her debut against Malawi in 2008.

Eboni was immediately exposed to international tournament netball in the form of the World Netball Series in 2009 before being selected for the Commonwealth Games in 2010 where she won a bronze medal with the team.

The experienced defender then made her debut at the Vitality Netball World Cup in Singapore back in 2011 where she won a bronze medal. She would repeat that feat twice more having been selected for the 2015 and 2019 editions of the tournament.

Eboni’s greatest achievement was being a part of the England side that made history by winning gold at the Gold Coast in the 2018 Commonwealth Games against home favourite Australia.

At the Vitality Netball World Cup in Liverpool a year later, Eboni made her landmark 100th appearance for her country in an emphatic 56-48 victory against Jamaica in front of a home crowd.

Eboni currently represents Team Bath in the Vitality Netball Superleague and has captained the Blue and Gold for the last four years. She made her debut with the franchise as a teenager during the 2006/07 season and won four VNSL titles in Bath before spending four years playing professionally in Australia from 2011 to 2015.