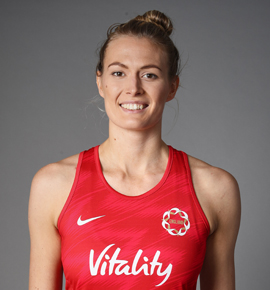 Ella Clark has been a prominent figure in the sporting community for several years having represented her country in both basketball and netball. Ella is a gifted shooter and that talent transcends the two sports she chooses to balance during the season.

Ella played netball internationally up until 2010 before she chose to focus on her basketball career, something she prioritised right up until 2016 when she returned to netball after six years through Saracens Mavericks.

Her performances in the Vitality Netball Superleague earned her a call-up for the Vitality Roses and she subsequently made her debut at senior level at Netball Europe in 2016. Ella now has five caps to her name having also travelled to Jamaica in 2018.

Having recently been awarded another full-time contract with the Vitality Roses for 2019/20, Clark will combine her national commitments with the full-time Loughborough Lightning programme, both of which are based at Loughborough University.

Clark also competes for Leicester Riders Women’s Basketball side. No stranger to the dual-athlete role, Clark boasts international caps for both netball and basketball and looks to successfully intertwine the two.

Having featured in Lightning’s 2017 and 2018 side that saw them pipped at the post in the Grand Final in two consecutive years, Clark’s experience in high pressure situations and leadership role within the squad will play a key part in their fortunes.

Where It All Began: Amy Carter