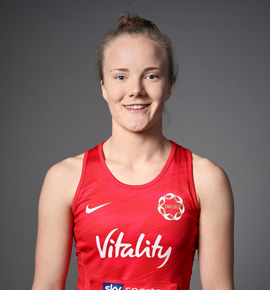 Netball has been a part of Gabriella ‘Gabby’ Marshall’s life ever since she began playing the sport at the age of four having been encouraged by her sisters at Oldham Netball Club. Now, Gabby has a wealth of experience at the top of the sport

Her international career began when she was selected for England’s U17 side. Following her appearance at U17 Netball Europe, she was invited to train with the U19s before quickly being selected as part of the U21 squad.

She captained the team to an unbeaten Netball Europe campaign in 2016 before earning a sport in the 2017 Netball World Youth Cup. She won bronze in Botswana and her performances earned her a call-up to the senior side later that year. Gabby made her debut for the Vitality Roses in at Netball Europe in 2017 and played in all four games in Cardiff.

The physiotherapy graduate has been crowned Fast5 Netball World Series champion with her country and has been a member of the full-time Roses programme for more than three years.

Domestically, Gabby plays for Saracens Mavericks in the Vitality Netball Superleague. At youth level, the youngster captained the franchise at the U19 Netball Performance League before making the step up to senior level.