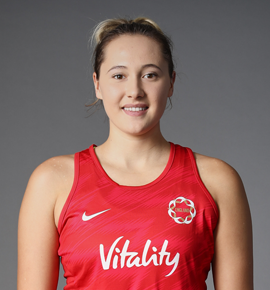 George Fisher has been a part of the set up at England Netball since the age of 14 and, after more than half a decade, has developed into a real asset for the Vitality Roses and her Vitality Netball Superleague franchise.

The goal shooter would have to wait until she was 19 to make her senior debut after several years of representing her country at the likes of U21 Netball Europe and the Netball World Youth Cup in 2017, where she won a bronze medal.

George now has a number of caps for the Vitality Roses having at Netball Europe Open in 2017 and on other tours and Quad Series. The Saracens Mavericks player recently helped England clinch the three-match test series against South Africa in 2019, proving to give her country the edge.

After two title-winning seasons with Wasps Netball, Fisher opted to return to the Mavericks, having begun her netball career in the Mavericks Pathway systems with the U19 NPL squad and eventually earning a VNSL debut in the 2015/16 season.

A hugely successful two years with Wasps followed as Fisher broke into the starting seven and scored almost 600 goals in 2018 on the way to a second consecutive VSNL title with the Midlands outfit.

George Fisher first represented the Vitality Roses at the age of 19 when she was named in the Netball Europe squad in 2017. Fisher has since played in the series against Jamaica and Uganda in 2018 as well as the Fast5 World Series in Australia in the same year.