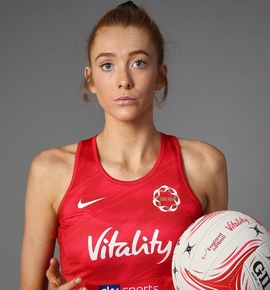 Helen Housby has been an influential member of the Vitality Roses set-up ever since she was handed her debut against Trinidad and Tobago in 2015. Her time in the international spotlight has only grown further since that game in Bath.

Helen played at Netball Europe days after her debut but truly announced herself in a red dress at the 2015 Netball World Cup in Australia. The young shooter played in every outing up to the semi-finals and picked up a bronze medal as a result.

Her experience in Sydney and in the multiple quad series that followed was evident at the next major international tournament; the Commonwealth Games in 2018. In total, Helen played in 25 of 28 quarters in Australia but it the final few seconds of the competition which sticks in the memory.

She scored the winning goal in the gold medal match against the hosts with the final shot of the game. It was a historic moment for the national team which won Sporting Moment of the Year at the BBC Sports Personality of the Year Awards later that year.

Helen’s journey continued to a home Vitality Netball World Cup in Liverpool in 2019. She and teammate Jo Harten proved to be one of the most clinical attacking pairings at the event as the hosts went onto win bronze.

Her success does not stop there, either. With Manchester Thunder, her first franchise, she won a Vitality Netball Superleague title when she was still just a teenager. The University of Manchester graduate stayed there for another two years before embarking on a spell in Australia.

With the New South Wales Swifts since 2017, Helen has become a fan favourite and a mainstay in the team. Her time in Oceania culminated in winning the  2019 Suncorp Super Netball title.

Fun Fact: Housby is equally as capable at juggling with her feet as with her hands.