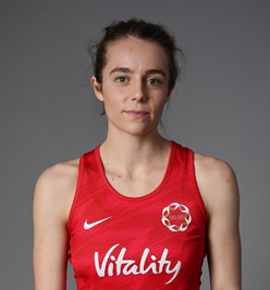 Iona Christian (Née Darroch) has been a part of England Netball since the age of 17 and the mid-courter has since become an invaluable part of the Roses full-time programme since her first inclusion in 2018.

Iona got her first taste of international experience when she went on a tour of Jamaica with the U21 squad in 2016 and went on to make a number of appearances at youth level for her country in the ensuing years.

The Wasps Netball player tasted success at U21 Netball Europe, multiple tours and at the Netball World Youth Cup in Gaborone in 2017. Iona won bronze in Botswana and her experience in these competitions helped set up a promising career for the youngster.

After representing England A, Iona got her chance to perform for the Vitality Roses at Netball Europe Open in 2019. A young side led by Sam Bird won the tournament in Belfast.

Alongside her duties with the Vitality Roses, Iona represents Wasps Netball in the Vitality Netball Superleague having joined the ranks at the Ricoh Arena for the 2020 season.

She had previously played for Manchester Thunder at youth level and at Severn Stars since the franchise’s inception in 2017.