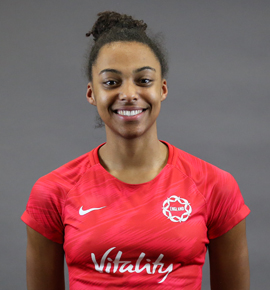 Jasmin Odeogberin has aims of playing a key part for the Vitality Roses in the future and has made great strides towards her dream.

The defender made her Vitality Netball Superleague debut for London Pulse when she came on at wing defence against Severn Stars in January 2019.

Odeogberin is currently on the books at Loughborough Lightning and was part of the squad that won British Fas5 All-Stars in 2019. The youngster has also been included in the franchise’s VNSL squad for the 2020 season.

For her country, Odeogberin went to her first international competition in 2017 when she won the Netball Europe U17 Championship before being selected for an U19 tour of New Zealand a few months later.

After more tours with varying age groups, she then captained the U17s on their tour of Australia in September 2018. The Essex Open player was then selected for Netball Europe Open in Northern Ireland in 2019.