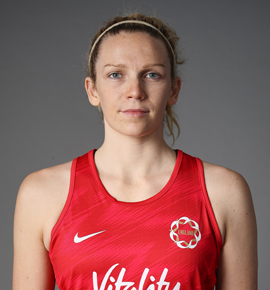 Jo Harten has represented the Vitality Roses more than 100 times and has become a talismanic figure for her country. The goal shooter won gold at the Commonwealth Games in 2018 and a bronze at the 2019 Vitality Netball World Cup on home soil.

Beginning her domestic journey with Loughborough Lightning, Jo then moved to Canterbury Tactix (2012–2013), followed by a spell with Waikato Magic (2014–2016) and has played for Suncorp Super Netball side GIANTS Netball since 2017.