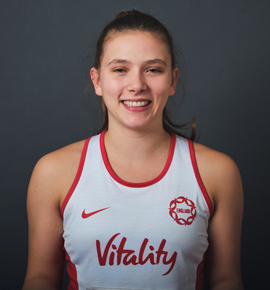 Kira Rothwell has been on the international scene since she was selected for the EN National Academy back in 2016 and has since built a stellar reputation for her country and in the Vitality Netball Superleague with London Pulse.

Rothwell, still just a teenager, has been named in the Pulse’s VNSL squad for the 2020 season after making her league debut in 2019 and winning the NPL Tournament with the franchise’s U21 side in the same year.

The goal attack has had similar success at youth level for her country to. Rothwell recently made her first appearances at a senior international competition at Netball Europe Open in 2019 and has been selected for the U21 long squad for the World Youth Cup in 2021.

Rothwell currently starts for Cumberland Netball Club in Premier League 1 and regularly plays against VNSL regulars during the season. The youngster achieved two successive promotions with the London club between 2018 and 2019.