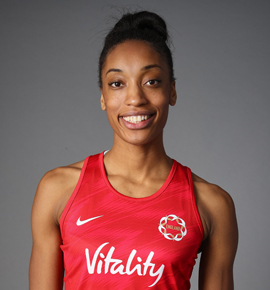 Layla Guscoth is one of the more experienced players in the current cohort of full-time Vitality Roses often demonstrates her defensive knowhow out on court or passing that knowledge onto young players in training.

Layla made her Vitality Roses debut in 2012 against Jamaica and has since obtained 26 caps for her country during her eight years as a player. Her appearances for England sporadic from 2015 onwards due to entering the foundation years of her junior doctor training.

As a result, the defender went several years without wearing the red dress but fortunately returned after the Commonwealth Games in 2018. Layla started the ensuing seven games after the triumph on the Gold Coast and then took part in every major competition until the South Africa series, which she missed through injury.

During that run, Layla established herself as one of the country’s best defensive players and was subsequently selected in the 12-strong squad for the Vitality Netball World Cup in 2019. Although her tournament was cut short, she was still able to take the rare opportunity to play in a home World Cup.

Layla earned her right to appear in Liverpool due to her performances for her country and club over the previous 12 months. The Oxford University and UCL graduate starred for Saracens Mavericks and Team Bath in the Vitality Netball Superleague, earning a place in the All Star VII team in 2018.

She currently resides in Australia where she plays for Adelaide Thunderbirds in the Australian Suncorp Super Netball League having signed in 2019. Layla was named as co-captain alongside Vitality Roses teammate Chelsea Pitman before she had even made her debut.