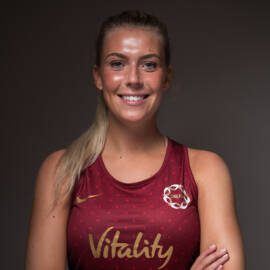 Millie Sanders has previously represented England at U17 and U19 level, including tours to Oceania.

She was selected for the U21 long squad for the World Youth Cup in 2021 before it was cancelled due to the COVID-19 pandemic.

After being part of the Manchester Thunder performance pathway for many years, Millie made her Vitality Netball Superleague debut for the club in 2021.

She has previously won national competitions for Premier League 1 side Tameside Netball Club.