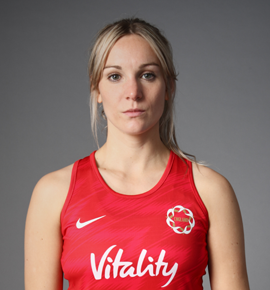 Whether it’s in England or Australia, Natalie Haythornthwaite has made a fantastic contribution to netball on both the international and domestic scenes.

Nat began her international career for the senior side when she made her debut against Trinidad and Tobago in 2015. It has since been quite a ride for Nat, who has earned more than 45 caps in the ensuing five years.

Those appearances for her country have come on the biggest stages and against the best sides in the world. The mid-courter has won medals at Netball Europe Championships, Vitality Netball World Cups and Commonwealth Games.

Nat played in the deciding quarter of England’s historic final Australia at the Commonwealth Games in 2018; it was her and her nation’s first gold medal at the competition. One year later, she made an impact at the Vitality Netball World Cup in Liverpool as her side went to win bronze.

Nat has continued to showcase her talents in a red dress since the tournament and captained the Vitality Roses to a three-match test series victory in South Africa before taking up the same role for the Vitality Netball Nations Cup.

Domestically, success has followed her across two continents. The Lancashire-born player started her career with a five-year spell with Yorkshire Jets before moving to Manchester Thunder in 2016. After another move to Wasps Netball, she won back-to-back Vitality Netball Superleague titles.

Her performances earned her a move to Australian side New South Wales Swifts in 2018. Injury stunted her first season in Oz but she returned in time for the NSW Swifts’ 2019 Suncorp Super Netball Finals campaign and was a standout performer in NSW’s Grand Final win over the Sunshine Coast Lighting in Brisbane.

Fun Fact: Haythornthwaite is a qualified speech and language therapist.