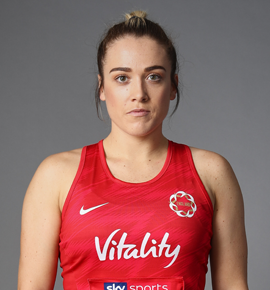 Having started playing at the age of nine, Vitality Rose and Loughborough Lightning star Natalie Panagarry did not make her Vitality Roses until 2016 when she faced Australia. She now, however, is a key asset for her country.

The mid-courter has now gained 17 caps for the Vitality Roses with the majority coming in the year of 2019. Those 12 months proved to be a pivotal year in her international career.

It was the year she made her debut for England at a major international tournament in the form of the Vitality Netball World Cup in Liverpool, where she made six appearances on her way to a bronze medal.

Under Jess Thirlby, Natalie has proven her worth to the team both on and off the court. A popular and energetic member of the squad, she has travelled with the senior team on a tour of Oceania and made the Vitality Netball Nations Cup squad in 2020.

Since joining Vitality Netball Superleague side Loughborough Lightning in 2015, Natalie has gone on to captain the side to two Grand Finals and a British Fast-5 Netball All-Stars Championship title.

Fun Fact: Panagarry used to play hockey for the north of England.

Where It All Began: Nat Panagarry