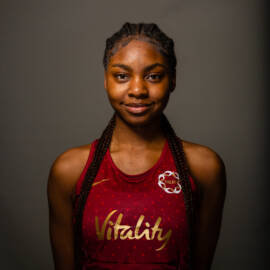 Peace Akinyemi was first selected for the Roses Academy before her 16th birthday and was once again included in the squad in 2021.

The defender was selected as a reserve for U17 Netball Europe in early 2019 and won gold at the 2020 competition.

She has progressed with Vitality Netball Superleague side London Pulse and debuted in the 2021 season.