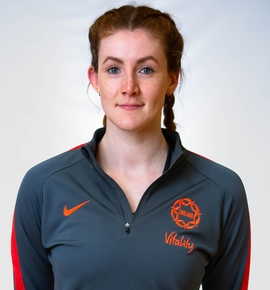 Rebekah Airey was among the first-ever group of players to be selected for the Roses full-time programme when it was launched in the summer of 2016.

It proved to be the year where Rebekah announced herself to the elite netball community. After selection, she embarked on a tour of Australia, made the long squad for the Netball World Youth Cup and was chosen as part of Loughborough Lightning’s Vitality Netball Superleague squad for the 2017 season.

The defender then captained her country to Netball Europe success at U21 level and was later selected as part of the England Futures programme for two consecutive years between 2017 and 2019.

After representing England A for three matches against the world’s best in January 2019, Rebekah was once again included in the full-time programme for the 2019/20 campaign before representing England at her first senior competition - Netball Europe Open - a few months later.

Domestically, the youngster represents Manchester Thunder in the Vitality Netball Superleague. Rebekah joined Thunder from Lightning in 2019 and, after a number of VNSL appearances in yellow and a spot at the British Fast5 Netball All-Stars, re-signed for the 2020 season.