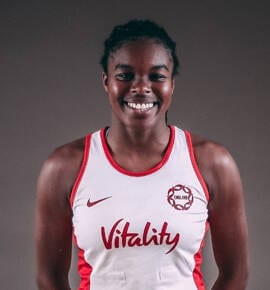 Savannah Dada-Mascoll has a bright, sporting future ahead of her due to her netball and tennis abilities.

Dada-Mascoll balances both sports but plays for Manchester Thunder as a defender when she’s on the netball court.

The teenager has previously played at the U15 Franchise Games for Thunder and was first selected for the Roses Academy in 2019.

England U17 make it two from two on opening day