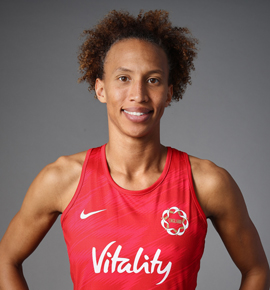 Serena Guthrie has been a member of the Vitality Roses for almost the entirety of her professional netball career after being making her debut for her country against Malawi when she had just turned 17 in 2008.

Since then, the Jersey-born centre has experienced all that international netball has to offer. She has played at three Vitality Netball World Cups (2011, 2015 and 2019) and two Commonwealth Games (2014 and 2018) and is still only 29.

Having won bronze in two of the three previous major international competition, Serena was part of the team that secured a record-breaking gold medal at the 2018 Commonwealth Games against Australia on the Gold Coast.

Following that success, Serena was selected to captain her country in a home Vitality Netball World Cup when the tournament came to Liverpool in 2019. She excelled for the Vitality Roses at the M&S Bank Arena as her side came so close to reaching their first-ever final.

Serena’s prodigious talent first earned her a place in the Team Bath Vitality Netball Superleague squad in the 2006-07 season when she was still studying for her A-levels. She won the title in her first season and went on to claim two more crowns during the next eight years, playing a pivotal role in the Blue and Gold’s last VNSL success in 2013.

Serena took the decision to move to the professional ANZ Championship and played for Northern Mystics of New Zealand, where she was named as the league’s Rookie of the Year.

She returned ‘home’ to Team Bath for the 2019 Vitality Netball Superleague campaign and, after another outstanding season, was inducted into the prestigious University of Bath Hall of Fame later in the year.