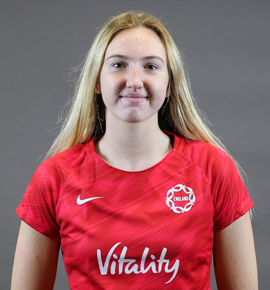 Sienna Rushton is a player that has shown maturity well beyond her years during the early stages of her netball career. After winning Netball Europe at U17 level, Rushton went on a tour of New Zealand with the U19 side at the age of just 15.

Rushton has since gone on two more tours of Oceania with different age groups and won another edition of Netball Europe, making her first appearances at a senior competition in the process, in 2019.

In Northern Ireland, Rushton shared the goal shooter position with Berri Neil but started the final game of the tournament against the hosts to great effect. Rushton and her side won the tournament despite taking an inexperienced squad.

Rushton was included in Wasps Netball’s Vitality Netball Superleague squad for the 2020 season after numerous games for the franchise at youth level and currently represents Turnford Netball Club in Premier League 1.