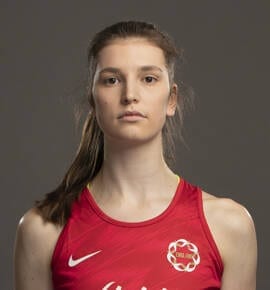 Sophie Drakeford-Lewis started her international journey when she was selected as part of the England National Academy back in 2016. She has since progressed through the age groups to make her handful of senior appearances for the Vitality Roses.

Sophie made her awaited debut as a 19-year-old at goal attack against Fiji at Netball Europe Open in Newcastle in 2017 before earning her second cap during the three-match test series with South Africa in December 2019.

This came after years of hard work at youth level. The goal attack went on numerous tours with the U21 side and at varying competitions including the Netball World Youth Cup in 2017, where she won a bronze medal.

Sophie earned her first selection for the Roses full-time programme in 2019 after spending a season with the England Futures. She quickly became part of the plans of head coach Jess Thirlby who took her on a tour of Oceania and included her in the squad for the South Africa series.

The attacker has been earmarked as one of the brightest players in the Vitality Netball Superleague due to her stellar performances for Team Bath. Sophie made her VNSL debut with Saracens Mavericks and was nominated for Young Player of the Season after scoring 284 goals for the franchise.

The youngster transferred to Bath for the 2018 season and quickly established herself as a regular starter in the attacking end of the court. Sophie continues to excel in the league and, after finishing the campaign with an 87 per cent shooting accuracy, she won the VNSL Young Player of the Season Award in 2019.

Fun Fact: Drakeford-Lewis has been a ball girl for Andy Murray and Novak Djokovic.

Where It All Began: Sophie Drakeford-Lewis