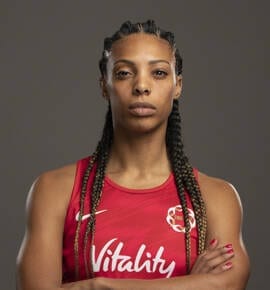 Stacey Francis has been on the international scene since she made her debut for the Vitality Roses in Jamaica in 2010 and has since developed a reputation as one of the best in her position.

Stacey, a defender, has collected 66 caps for the Vitality Roses since her debut and has won many prizes along the way. These include her two bronze medals at the Vitality Netball World Cup - in 2011 and 2015 - and another bronze at the Commonwealth Games in 2010.

During a two-year break from international netball, Stacey switched the Vitality Netball Superleague for Suncorp Super Netball in Australia.

The former Team Bath and Yorkshire Jets star has made quite the impression since joining West Coast Fever in 2017. A popular figure in Perth, Stacey won awarded Coaches’ Player of the Year in her first season and helped her side to their first Grand Final in 2018.

Her popularity is perhaps unsurprising when you consider she has made a lasting impact wherever she has played. For Bath, she won five VNSL titles in her decade with the franchise and was subsequently inducted into the University of Bath Hall of Fame for Sport in 2017.

Stacey returned to the international stage in November 2019 when she joined the Vitality Roses on their three-match test series with South Africa.

Fun Fact: Stacey has been inducted into the University of Bath Hall of Fame for Sport.