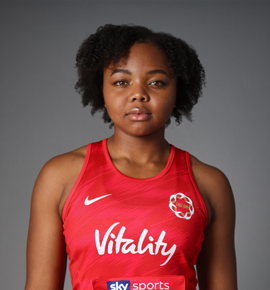 Summer Artman has been a familiar face among the national team set up since she became one of the first cohorts of the Roses full-time programme in 2016. Her potential was immediately evident and, as a teenager, this was proven by her inclusion in the senior squad for the inaugural Quad Series.

Summer would have to wait until 2017 to make her national team debut and finally donned the red dress at Netball Europe Open in Cardiff. This came just months after she won bronze at the Netball World Youth Cup in Botswana.

The defender would earn the next of her four caps in a three-match test series in Jamaica and she would go onto play twice at goal keeper against the Sunshine Girls. Further appearances for England A followed as did a tour of Australia and New Zealand under new head coach Jess Thirlby.

Following her selection for the 2019/20 season, Summer became one of just eight players to have been included as a Vitality Rose in the full-time programme squad for each of the four seasons since its inception.

In the Vitality Netball Superleague, Summer has underlined her status as one of the country’s best young defenders due to her performances for Team Bath. Alongside fellow Vitality Rose Eboni Usoro-Brown, the former Saracens Mavericks player helped her side finish third in the 2019 campaign.