This weekend saw the VNSL season conclude in spectacular fashion with an exhilarating semi-final and an epic Grand Final at the Copper Box Arena. In the SSN, GIANTS Netball and West Coast Fever confirmed their top four status with narrow Round 13 victories and Geva Mentor’s Collingwood Magpies took another step closer to joining the top four club.

Here’s how the Vitality Roses got on this weekend…

Manchester Thunder secured their place in the VNSL Grand Final with a ten goal victory over Team Bath on Friday night.

Imogen Allison was focused on creating chances for Team Bath as she fired 19 feeds into the circle.

Thunder’s Eleanor Cardwell added 31 goals to the scoreboard in contribution to her side’s 10 goal win (64-54).

Their victory secured their place in the Grand Final and meant that Team Bath Netball will feature in the third place playoff.

In the other semi final fixture, Loughborough Lightning earned a win over London Pulse, confirming their position in the Grand Final.

Lightning’s Ella Clark displayed her accuracy in both shooting and passing as she totalled 21 goals and 19 feeds.

At the other end of the court, Olivia Tchine added 25 goals to Pulse’s scoresheet, but despite her efficiency in front of goal, it wasn’t meant to be for the London side, Lightning ending the fixture with a 56-44 lead.

Alice Harvey was named player of the match, she gave an outstanding defensive display, totalling seven interceptions and seven turnovers. 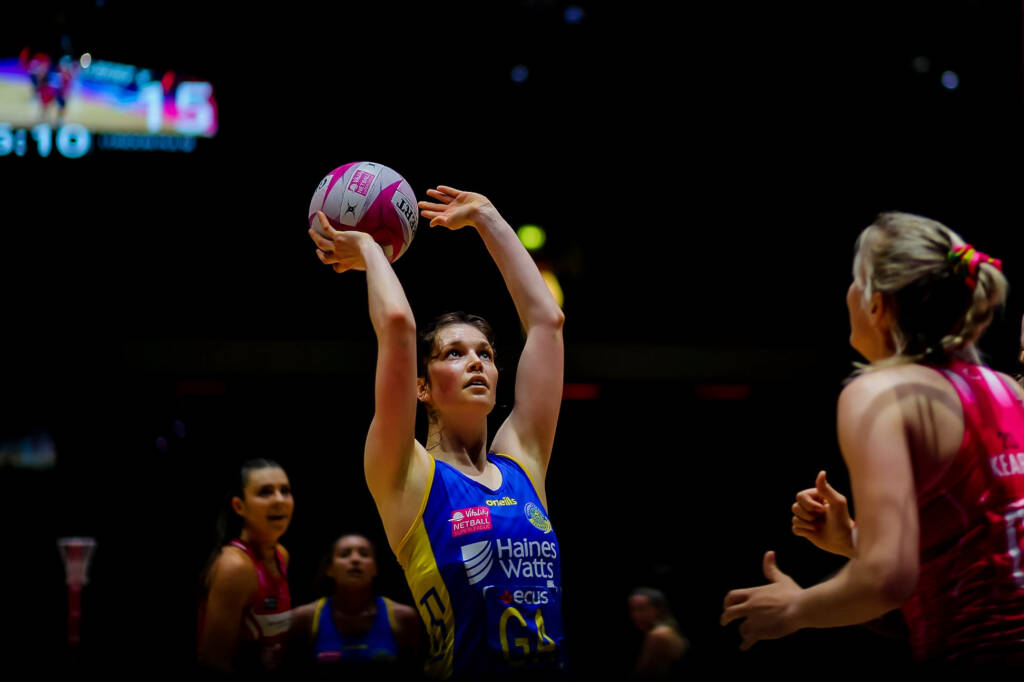 Following an exhilarating four quarters at the Copper Box Arena, Team Bath Netball secured the third spot in the competition after they edged a four goal victory over London Pulse. Team Bath’s Layla Guscoth played her part in nullifying Pulse’s attack as she notched eight deflections and turnovers.

Also displaying her defensive acumen was Pulse’s Funmi Fadoju with 13 deflections and 11 turnovers.

Both teams battled it out in what was an end-to-end contest but after four quarters, Team Bath had established a 36-32 lead, earning themselves the third spot in the competition.

Manchester Thunder, who had completed their season unbeaten, were crowned this year’s VNSL champions following their victory over Loughborough Lightning in Sunday’s Grand Final.

Both teams started quickly, aiming to assert themselves but it was Thunder who scored first, an accurate shot from the hands of Eleanor Cardwell opened the scoring and at the end of the first quarter, Thunder had established a 12 goal lead (20-8). 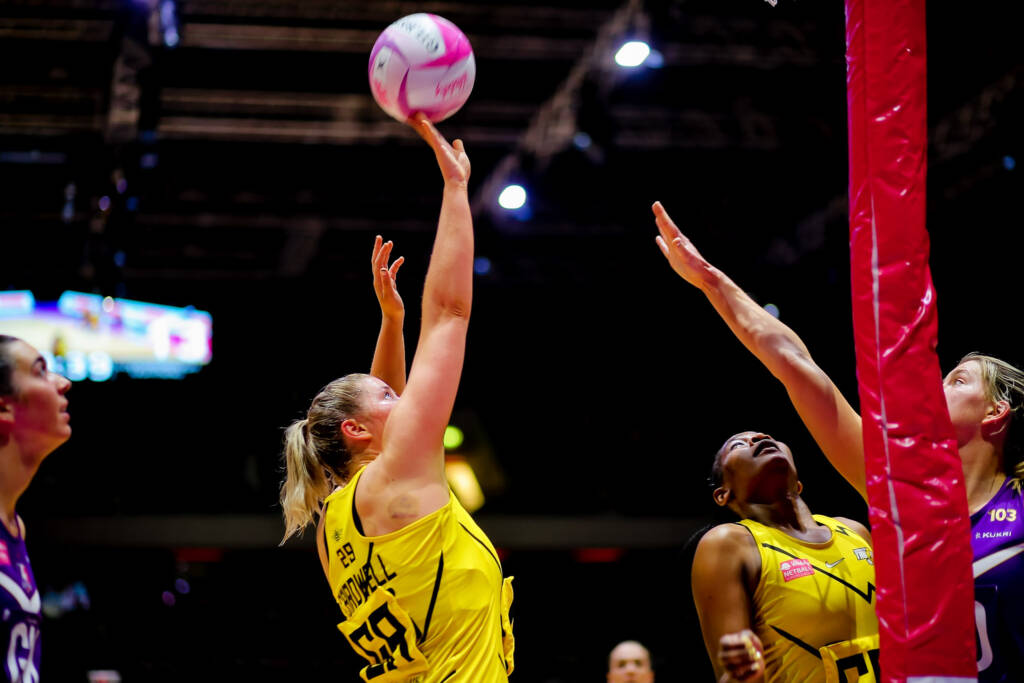 The second quarter of action was an end-to-end display, Lightning’s Fran Williams was focused on making Thunder’s life difficult in front of goal, her defensive pressure led to five turnovers.

Thunder continued to push Lightning, Metcalf repeatedly created chances for her side and totalled 11 well-placed feeds into the circle. At the halfway mark of the match Thunder led 36-23.

Lightning came out strongly after the break, the third quarter saw them outscore Thunder by four goals, reducing the deficit to 46-37 by the end of the penultimate quarter.

Going into the final quarter, although trailing by nine goals, Lightning had gained confidence, they moved the ball around the court well, hoping to score in quick succession but Thunder continued to push the opposition, Malcolm earned three crucial turnovers and two huge interceptions to keep Lightning at arm’s length.

At the end of the final quarter, with the score 60-53, Thunder were crowned VNSL 2022 champions. 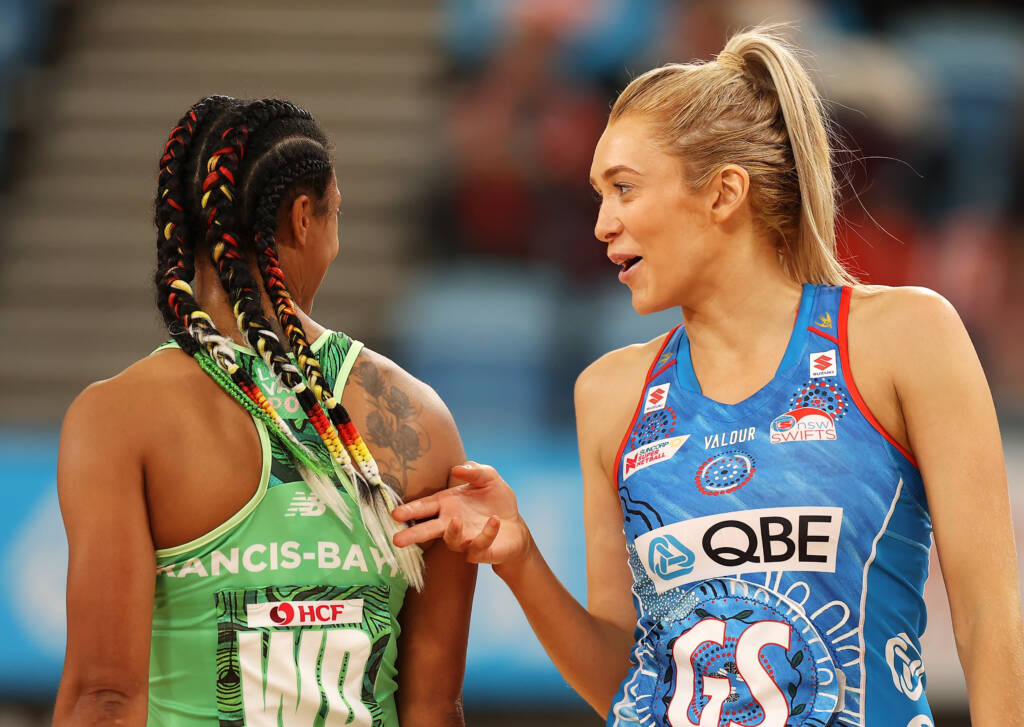 Swifts’ Helen Housby had an eye for goal as she scored 39 goals for her side.

Despite the pressure from their opponents, Stacey Francis-Bayman’s side were able to hold off Swifts, finishing the match with a one goal lead (72-73). 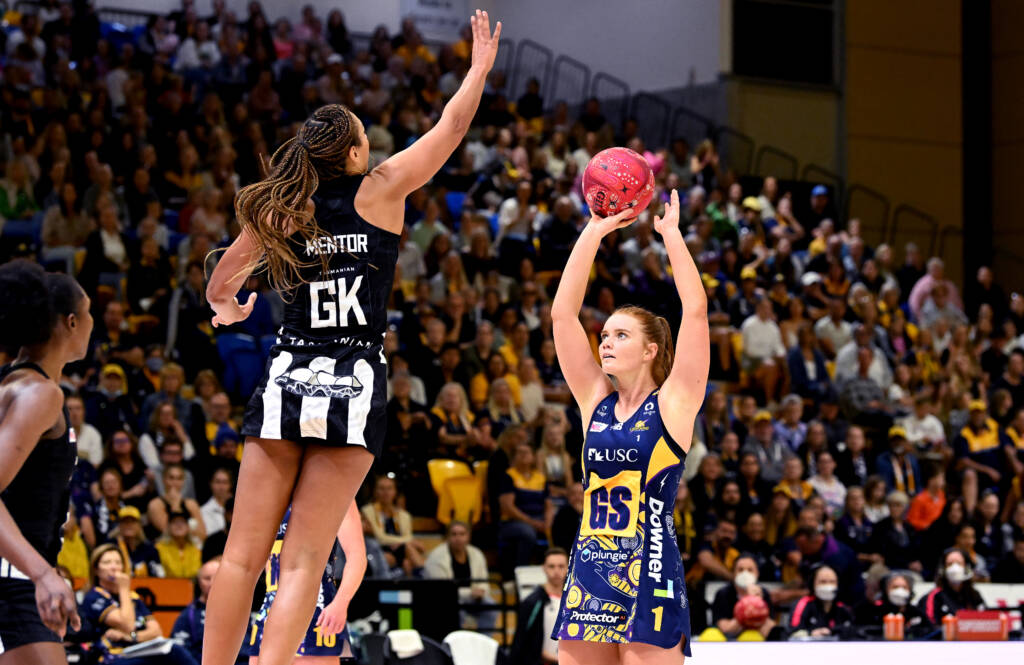 Geva Mentor defends for her side Collingwood Magpies in the SSN.