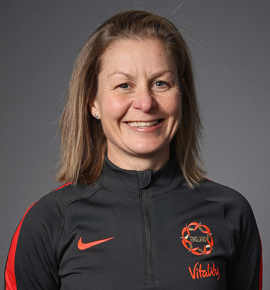 Sara joined England Netball in March 2015 with an abundance of experience in performance roles and as an athlete with British Cycling.

Beginning her cycling career after graduating in 1998, Sara captained Great Britain’s road and track squad, representing her country at two Olympic Games, two Commonwealth Games and at the World Championships.

After working in various roles for British Cycling, British Triathlon and Archery GB to name a few, Sara now lends her expertise to England Netball.

In her four years at England Netball, she has led on the creation of a four-year Quad Series, the relocation of elite programme to full-time status, the restructure of all age group competition, and the restructuring of the performance department among other notable milestones.