We’re so excited to wrap our virtual arms around your virtual shoulders as we welcome you to our first ever team huddle! The Huddle is a brand new feature in the Virtual Netball Club (VNC) and promises to do what all good huddles do – bring the whole Netball Family together!

Ultimately it’s a space to share amazing stories and celebrate incredible achievements – from members of the Netball Family who work on the front line, to those fundraising or keeping their teammates engaged throughout the pandemic – we’ll be sharing the stories of people who inspire us.

With so many of us accessing netball via virtual means this past year, we wanted to start by celebrating the role Jan Johnson has played in setting up a regional virtual league (a concept brought to her by MK Dons Netball Club), keeping players connected, motivated and engaged during lockdown. A huge thank you from all of us here at England Netball and everyone who has enjoyed being part of the league.

Jan commented: “Over lockdown, we wanted to make sure the girls in our clubs in Netball South stayed connected, motivated and were able to keep fit. We know how much everyone misses netball, so we wanted to create a way to keep everyone together.”

Jan Johnson truly does it all. She leads the organisation of competitions as a volunteer on the Netball South Regional Management Board and over lockdown has created a virtual netball league that sees up to 600+ participants from 48 teams join every Saturday morning.

Using her excel spreadsheet wizardry, Jan’s league marks players from teams in U13, U14, U15+ U19 every week in a similar way to in real life netball tournaments. The sessions start with a warm up, followed by 10 netball based fitness challenges where South performance coaches, Julie and Christina, are joined by other club coaches, scorers and parents are on hand cheering and encouraging participants over Zoom.

Each challenge earns points, and these are tallied up at the end of the session. This competitive element, where participants battle against the other teams in the league helps everyone to stay engaged – the format is as close as possible to playing in a real life league!

She added: “The league started on January 23rd, and we’re so pleased to have so many girls and young women join us for sessions so far. Mental health has been such an important thing to consider during lockdown for our players, and if it can help even one person to feel good and have a better day, that’s enough for me! 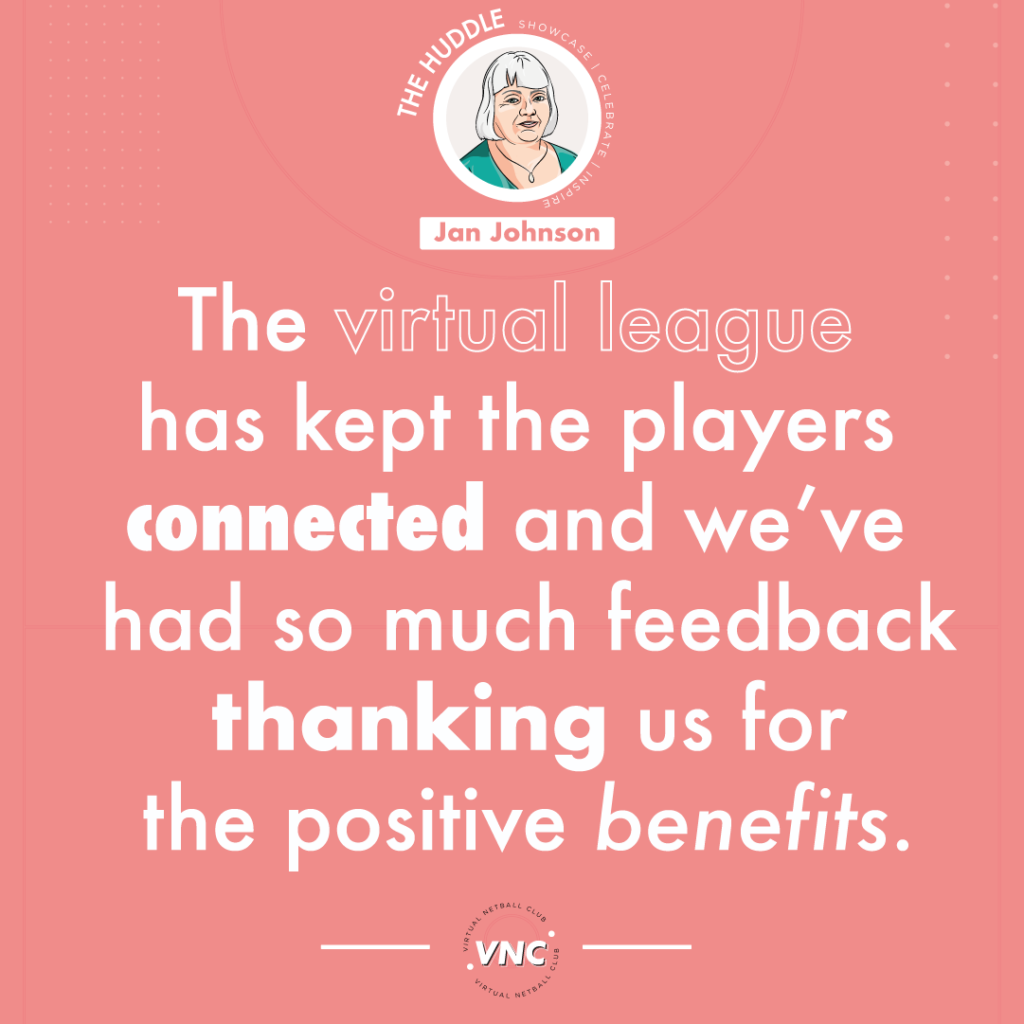 “Some of our players are so used to being in competitions every week, so with that gone there’s a big gap in lots of people’s lives. We try to make the sessions as competitive as possible as we know that really motivates the girls. At an age where we typically lose so many girls in sport, we want to do all that we can to ensure we’re keeping people engaged with the sport.”

It’s not only England Netball who are super fans of Jan – the BBC recently profiled one of the sessions, and Netball Australia are due to be joining in with one of the Saturday morning Zooms next week. On behalf of everyone in the Netball Family, we want to say a massive thank you to Jan and everything she’s done to keep people connected through netball in lockdown.

We hope Jan’s story has made you smile! If you’d like us to tell your story, or want to nominate someone to feature in The Huddle, submit a story here.