The Vitality Roses defeated the international Vitality Netball Superleague All Stars 70-54 as the three-match series began on Wednesday night.

Stepping on to the court on home soil for the first time in a year, the significance of the result was outweighed by the impact of restoring live netball to our screens in this challenging period for the sport.

England Netball has worked tirelessly to organise the Vitality Netball Legends Series and the Roses were made to work hard for the win as the All Stars delivered a solid performance despite only training together for the first time on Monday.

The Vitality Roses battled through the opening two quarters, maintaining a reasonable lead before accelerating after halftime with 20 points registered in the third quarter to stretch the scoreline.

Head coach Jess Thirlby was back courtside having missed the Cadbury Netball Series in New Zealand due to contracting Covid-19 and she spoke about the build-up to this series: “It’s been an interesting couple of weeks, I think from a Roses perspective pretty much since July we’ve been on and off self-isolating so it’s been a huge sacrifice from everyone involved.

“Then since the end of December we were isolating in preparation for the Jamaica series which sadly got cancelled, and then had to turn to contingency plans.”

There were less than two weeks between the postponement of the test series with Jamaica’s Sunshine Girls and the fixtures against the All Stars being announced to ensure England secured some much-needed court time.

“From my point of view, I don’t take defeat very easily, so I was very quick to carve out the next best performance opportunity to ensure these Roses are the best they can be ahead of next year. The obvious really was to pull the best international talent we have in the UK,” Jess explained. 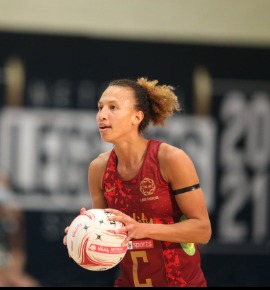 Co-captain Serena Guthrie was pulling on the red dress for the first time since earning her 100th cap back in October in New Zealand and she reflected on the night’s work: “We’ve done some homework on all of the individuals in the All Stars team but tonight it was very much about seeing what they threw out at us.

“I think particularly at the start Razia (Quashie) and Layla (Guscoth) really started to pick up a few patterns and win a bit more ball, that was really positive for us.”

Preparing to face a side with no history of playing together can be difficult and Serena spoke about overcoming the All Stars’ approach: “It’s so exciting, we weren’t sure what we were going to get thrown at us. Really proud of the team on how we adjusted.

“Probably not quick enough in attack in that first half but the changes made some impact and we were able to get some flow in the second half.”

The second test in the series is on Friday with the first centre pass at 6:00pm and coverage starting on Sky Sports Arena, Mix and YouTube from 5:45pm.