The latest round of the VNSL season saw London Pulse cement their place in the top four, Wasps and Loughborough Lightning involved in an edge-of-your-seat display and Leeds Rhinos and Severn Stars go down to the wire in front of a fired-up Leeds crowd.

Elsewhere, there were narrow margins in the ANZ Premiership and high scoring, tightly-contested matchups in the SSN including an extra-time thriller between GIANTS Netball and Melbourne Vixens.

Here’s how the Vitality Roses got on in all competitions…

London Pulse secured a top-four spot with a 41-57 win away at the Emirates Arena against Strathclyde Sirens.

Pulse’s Olivia Tchine played a key part in her team’s success as she totalled 43 goals.

At the opposite end, Sirens and Future Roses’ Taylor McKevitt displayed her defensive acumen as she amassed six deflections and two well-earned turnovers for her side.

Despite this contribution, Pulse’s pressure and quick ball movement saw them take the win, securing a spot in the semi-finals for the first time in the club’s history. 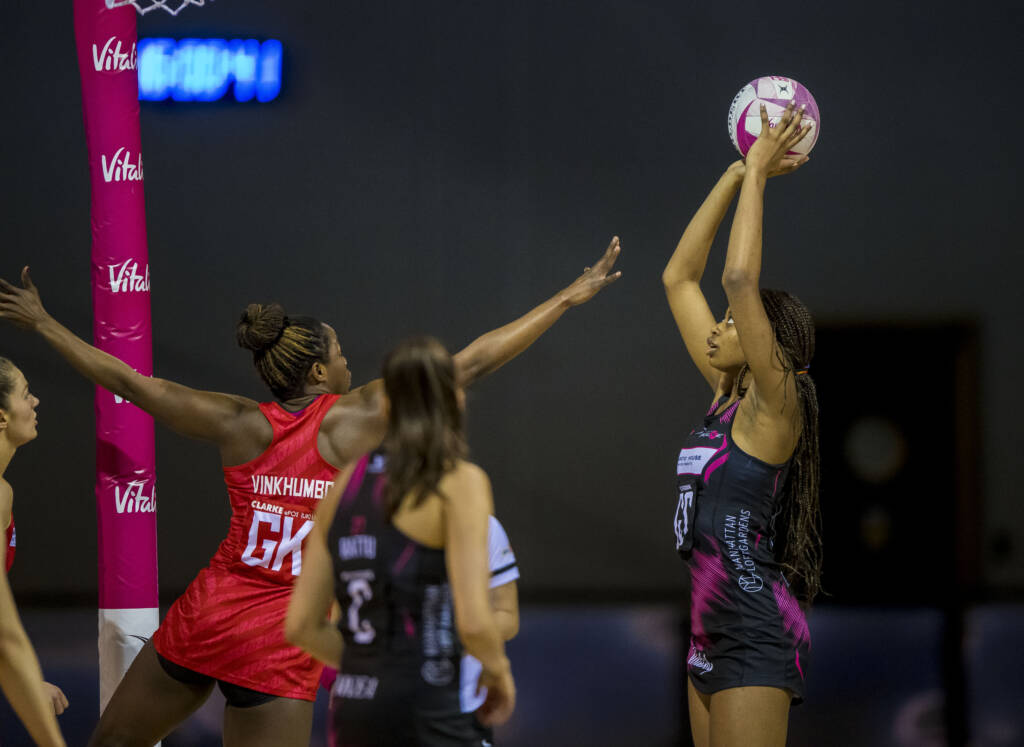 After an end-to-end display, Loughborough Lightning fought to the final seconds to edge a two-goal victory away to Wasps (52-54).

Lightning’s Hannah Joseph played a vital role in the fixture; she notched 24 feeds for her side, which were put away well by shooting partners Ella Clark and Emma Thacker.

Manchester Thunder continued their unbeaten run with a 61-53 win at home to Saracens Mavericks.

Thunder’s Lois Pearson came on and displayed her creative vision as she totalled 14 feeds to support her side’s success.

Leeds Rhinos and Severn Stars were entangled in an edge-of-your-seat display which saw a last-minute goal from Sienna Rushton secure the win for Rhinos (56-55).

After four extremely close quarters at the Sport Wales National Centre, it was Team Bath who earned the victory against Celtic Dragons.

The Monday Night Netball fixture went goal-for-goal for most of the matchup; both teams mirrored each other’s finishing in the second half and both notched up 12 goals in the third and fourth quarters. Despite this, an early five-goal lead helped Team Bath to secure the win (44-49). 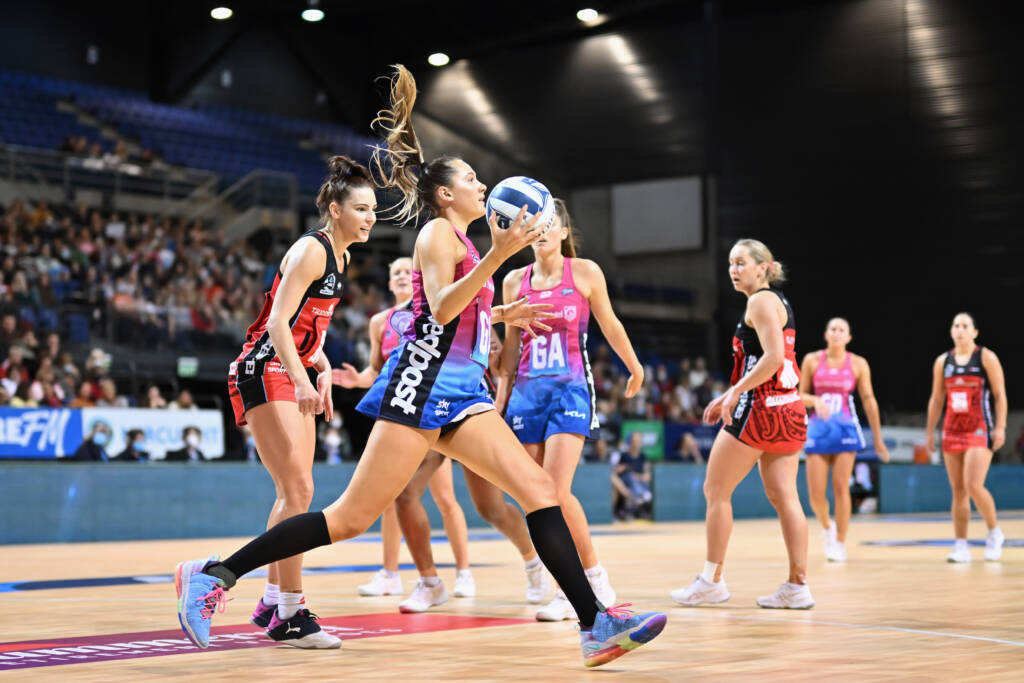 CHRISTCHURCH, NEW ZEALAND – MAY 15: George Fisher of the Steel catches the ball during the round ten ANZ Premiership match between the Tactix and the Steel at Christchurch Arena on May 15, 2022 in Christchurch, New Zealand. (Photo by Kai Schwoerer/Getty Images)

Despite 41 goals and four rebounds for her side, George Fisher’s Southern Steel were left unrewarded in their fixture against Trident Homes Tactix.

With 15 minutes left to play, both teams entered the fourth quarter level on 45 goals, but a flurry of finishing from Tactix saw them push to a five-goal advantage at the final buzzer (61-56).

Both sides went goal-for-goal, each team matching each other’s scores in the first, second and third quarters and with the match hanging in the balance, both teams entered the final 15 minutes with all to play for.

The fourth quarter got off to a flying start with both teams striving to take the win but with just under a minute left to play, Fisher scored the final goal of the match and secured Steel’s victory. (49-51).

Stacey Francis-Bayman’s West Coast Fever recorded another win in the form of a 65-74 victory away at Sunshine Coast Lightning.

At the end of the fourth quarter, both sides were matched on 60 goals, and after a short break, they returned to the court for extra-time.

Both teams immediately went goal-for-goal and brought the scoreline to 63-63, however, a final push from Vixens saw them score three in quick succession, bringing the final score to 63-66 in their favour.

In a tightly contested fixture, Geva Mentor’s Collingwood Magpies walked away victorious after earning a 71-67 win in their match against Eboni Usoro-Brown’s Queensland Firebirds.

Finally, Helen Housby produced a standout performance for NSW Swifts in their win over Adelaide Thunderbirds. 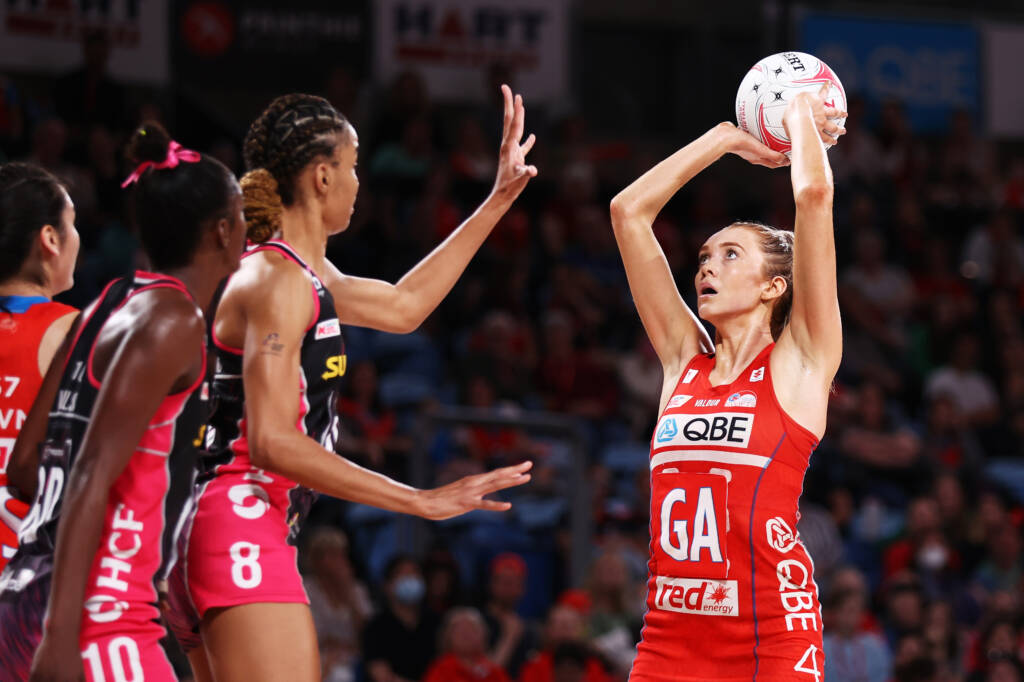 SYDNEY, AUSTRALIA – MAY 15: Helen Housby of the Swifts shoots during the round nine Super Netball match between NSW Swifts and Adelaide Thunderbirds at Ken Rosewall Arena, on May 15, 2022, in Sydney, Australia. (Photo by Matt King/Getty Images)

Housby scored 30 goals and recorded nine turnovers in contribution to her side’s 54-40 win.

Helen Housby’s NSW Swifts secured a narrow win in their away fixture against Sunshine Coast Lightning.

Housby added 41 goals to the tally, including the match-winning shot, to edge Swifts to victory (61-60).

Swifts win means that Lightning are no longer in with a shot at reaching the finals (for the first time since 2017).

Stacey Francis-Bayman’s West Coast Fever lost their top spot on the table after a narrow defeat to Melbourne Vixens.

Vixens got off to a strong start, scoring 23 goals in the first quarter, but Fever began to find their rhythm, outscoring Vixens in both the second and third quarters of the match.

The final quarter was extremely close, Fever scored 17 goals while Vixens notched 18, in spite of this, the inroads made by Vixens earlier in the match meant that they walked away with the victory and moved to first place on the table (64-70).

GIANTS Netball bounced back from their previous round’s defeat with a win over Geva Mentor’s Collingwood Magpies.

Adelaide Thunderbirds earnt a 68-55 win in their matchup against Eboni Usoro-Brown’s Queensland Firebirds.

It was a tight contest for the majority of the match but Firebirds struggled to convert in the last quarter, leading to Thunderbirds extending their advantage and securing the win.