The penultimate round of the Vitality Netball Superleague has now concluded and the final top four spot has been filled, Round 11 of the ANZ Premiership saw George Fisher’s side Southern Steel played two fiery fixtures over two days and the SSN was wall-to-wall with high-scoring action.

After a closely contested four quarters, Team Bath ended their match against Wasps with a two-goal lead, taking them one step closer to securing a spot in the top-four.

The fixture at the Team Bath Arena was fast-paced from the offset. Both sides went goal-for-goal, converting their chances and ending the, first quarter locked at 11-all.

Wasps stretched themselves to a four-goal advantage in Q2, but Team Bath responded well. Inspired by a huge intercept from Layla Guscoth, they began to build momentum, finding openings in the Wasps half and pulling the score to 23-22 in their favour.

Following the half-time break, the match resumed in end-to-end fashion. Team Bath’s Imogen Allison continued to create chances for her side, threading ten well-placed feeds into the circle.

With just three goals in it, the final quarter saw both sides wrestle for victory. Wasps were the first to find the goal but Team Bath responded immediately, Guscoth continued to disrupt Wasps’ offensive efforts as she notched six deflections and four crucial turnovers and as the final buzzer sounded, Team Bath led by two goals (43-41).

Saracens Mavericks’ top-four hopes were thwarted by Leeds Rhinos after an intense game at the Allam Sports Centre.

Rhinos’ Brie Grierson made her mark on the match as she totalled 19 feeds for her side.

At the other end of the court, Aliyah Zaranyika battled valiantly to minimise Rhinos’ opportunities in front of goal, earning eight turnovers and five deflections.

After a high-intensity display from both sides, the final score read 62-58 to Rhinos, knocking Mavericks out of the running for the top four and cementing Team Bath’s place in the semi-finals.

Loughborough Lightning secured a win in their Saturday night fixture at home to Severn Stars. 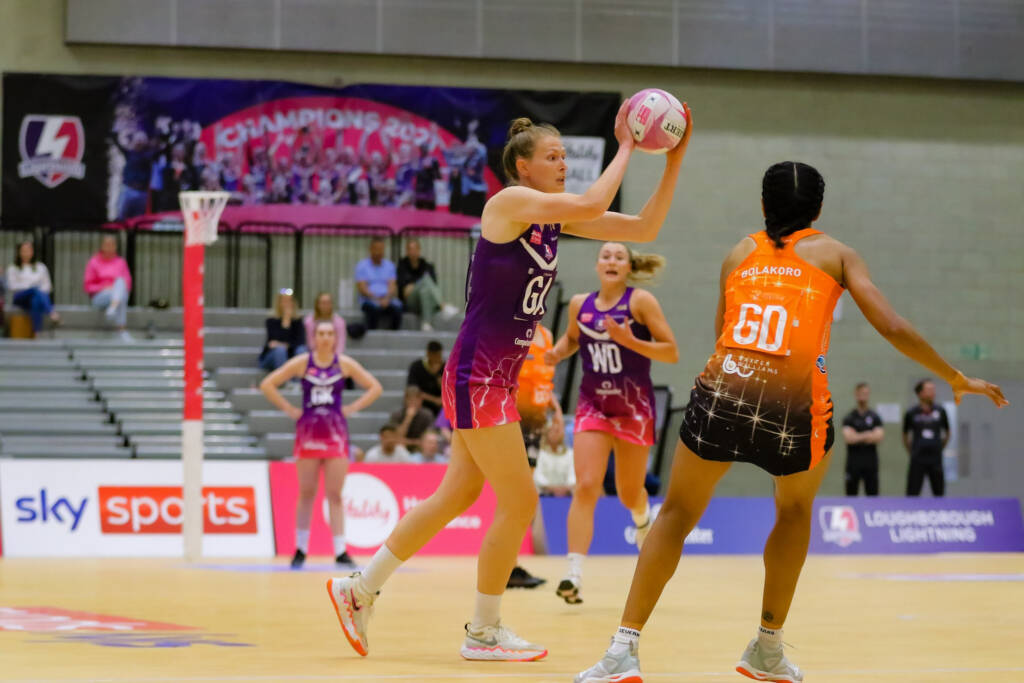 London Pulse earned another victory away from home after winning by seven goals against Surrey Storm.

Pulse defender Funmi Fadoju played her part in keeping her opponents at bay as she totalled ten deflections for her side.

Manchester Thunder remain undefeated after an enthralling contest at the Copper Box Arena, coming from behind to win 50-56 away against London Pulse.

Thunder’s Laura Malcolm took the first centre pass to get the match underway, and with both sides’ top four status guaranteed, there was nothing to lose.

Thunder were the first to find the goal but Pulse responded wel. An accurate shot from the hands of Olivia Tchine opened the scoring for the London side.

Pulse continued to go head-to-head with the league-leaders and ended the first 15 minutes with a one-goal advantage.

The second quarter got underway in similar fashion with both sides looking to assert themselves on the match.

Thunder’s Nat Metcalf continued to set up her attacking partners Eleanor Cardwell and Joyce Mvula as she totalled 16 feeds into the circle.

But at the other end of the court, Tchine continued to finish well and kept the scoreboard ticking over for the hosts.

As the buzzer sounded for halftime, Pulse had built their lead to 26-21.

The third quarter was another end-to-end battle, with neither side able to run away with the scoring, both teams added 15 goals to their tally, ending the penultimate quarter 41-36 in favour of Pulse.

Thunder made their mark in the final quarter of the match. Gilbert Player of the Match Eleanor Cardwell remained cool under the post and helped her side overturn the host’s advantage as Thunder won 20-9 in Q4 with Cardwell notching 30 goals throughout the game. 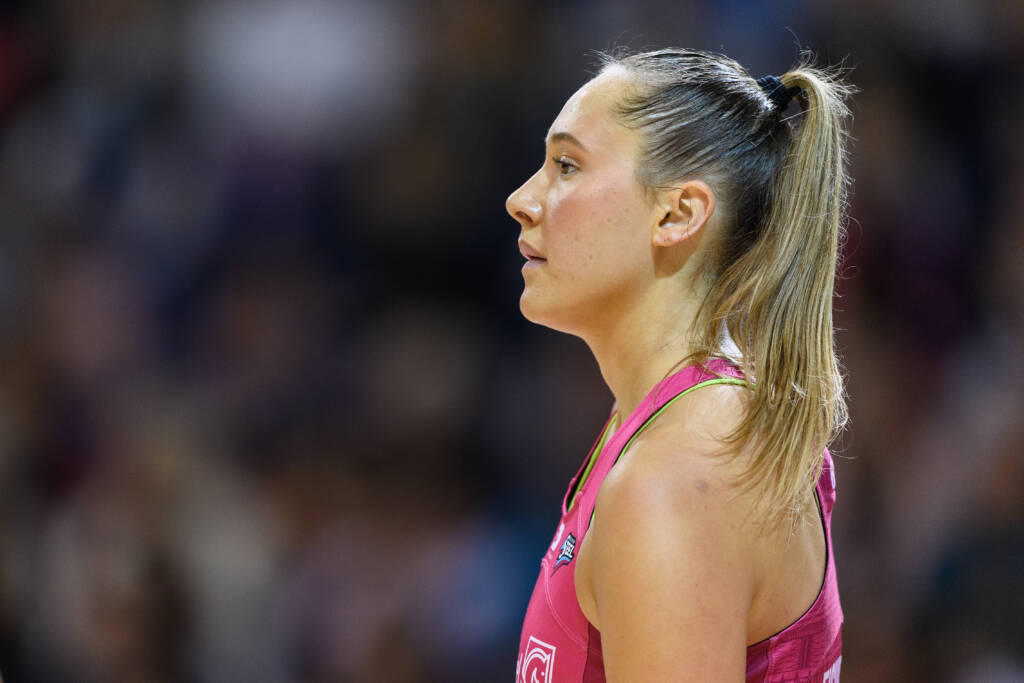 Despite sinking 39 goals for her side, George Fisher’s Southern Steel were unsuccessful in their matchup against Central Pulse as the visitors pushed to a ten-goal win in the final quarter (49-59).

Sunday saw Southern Steel take to the court once again, this time against Splice Construction Magic.

George Fisher continued her sharp shooting, missing just one of her 51 attempts under the post, helping her side  sail to a 68-57 victory. 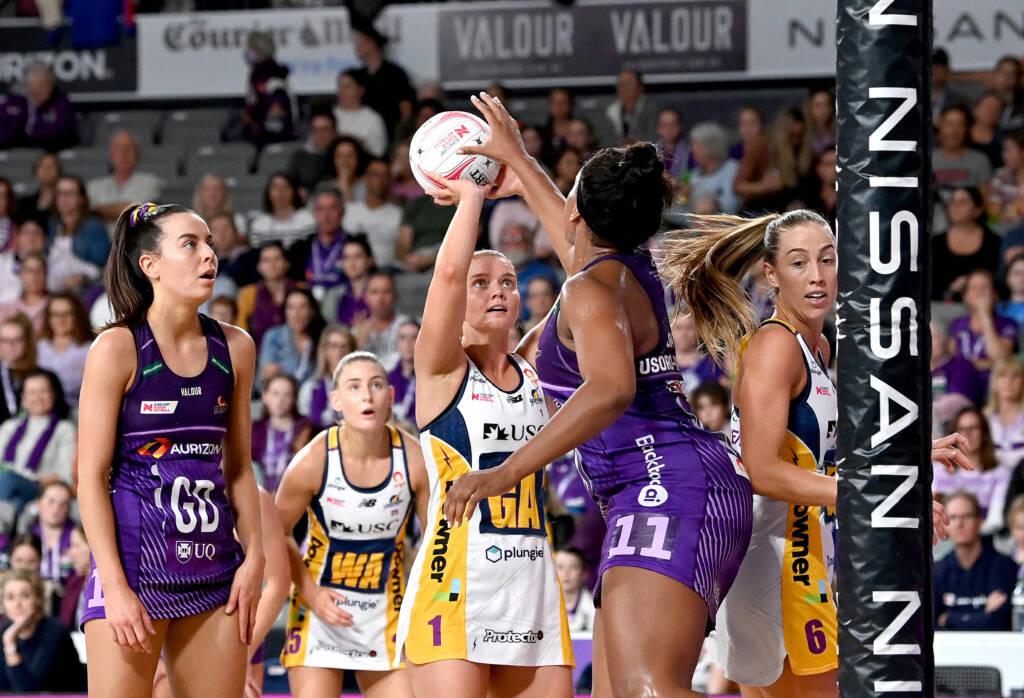 Lightning netted 28 goals against Firebirds in the final quarter to help ensure their win (61-82).

Swifts’ Helen Housby put 35 goals on the scoreboard but the pressure amounted by league leaders Vixens was just too great for Swifts, who were left trailing by six goals at  full-time (59-53). 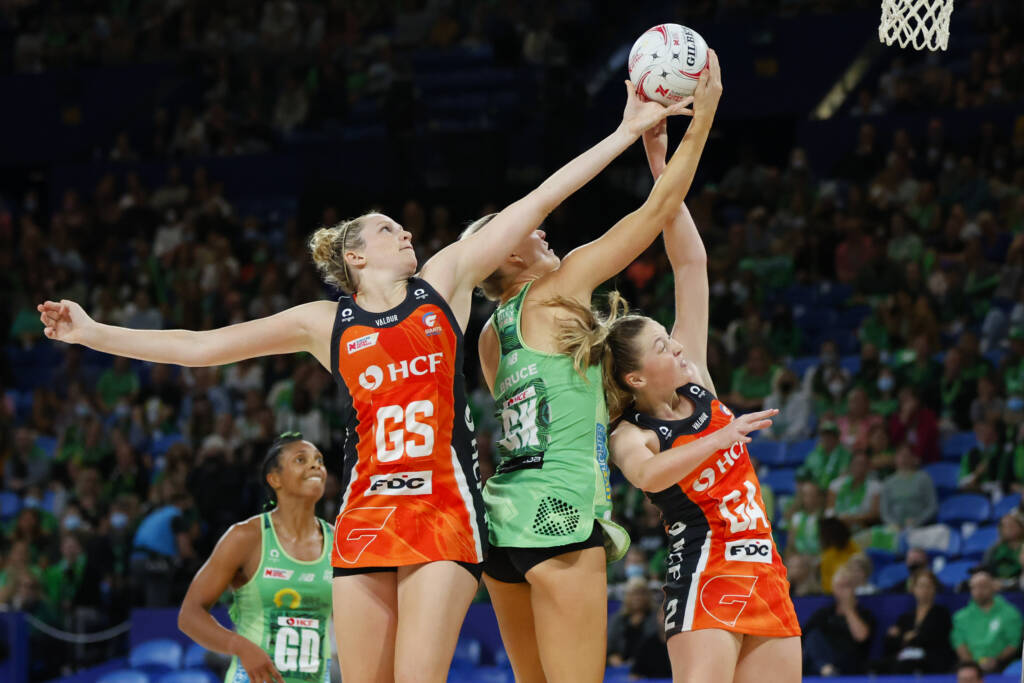 PERTH, AUSTRALIA – MAY 22: Jo Harten and Sophie Dwyer of the Giants compete for the ball against Courtney Bruce of the Fever during the round 11 Super Netball match between West Coast Fever and GWS Giants at RAC Arena, on May 22, 2022, in Perth, Australia. (Photo by James Worsfold/Getty Images)

The match got underway in a high-scoring fashion.Both sides scored over 20 goals in the first quarter with Fever retaining a narrow lead (23-21). 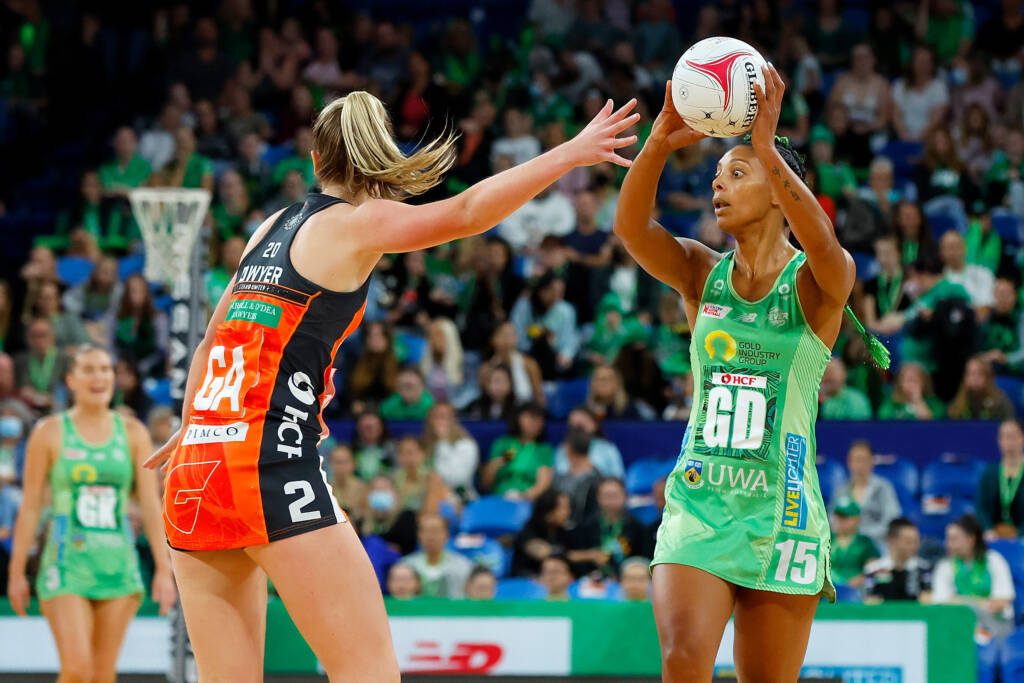 PERTH, AUSTRALIA – MAY 22: Stacey Francis-Bayman of the Fever looks to pass down the court during the round 11 Super Netball match between West Coast Fever and GWS Giants at RAC Arena, on May 22, 2022, in Perth, Australia. (Photo by James Worsfold/Getty Images)

Francis-Bayman’s side continued to chip away at GIANTS and as full time was called, they had pushed to an 86-77 victory.

Finally, Geva Mentor’s Collingwood Magpies were edged to a narrow defeat at the hands of Adelaide Thunderbirds with the score finishing 53-58.