England Netball is delighted to announce that the Government has given the green light to accelerate the return of the sport through a modified version of the game.

This approval activates a revised roadmap for the return of community netball that from today, allows modified training to take place, for groups of up to 30 people per court, subject to netball organisations having the required risk mitigations in place. The recent approval also permits leagues and competitions to return from 26th Sept (Stage 4b).

This is an important milestone post lockdown and means netballers can now reunite on court and enjoy the many benefits of netball once again.

To support you in getting back onto court click here to access a full Re-start Netball Activity guidance document.

Here is England Netball’s revised Return to Play Community Netball Roadmap (click on the image to expand the roadmap): 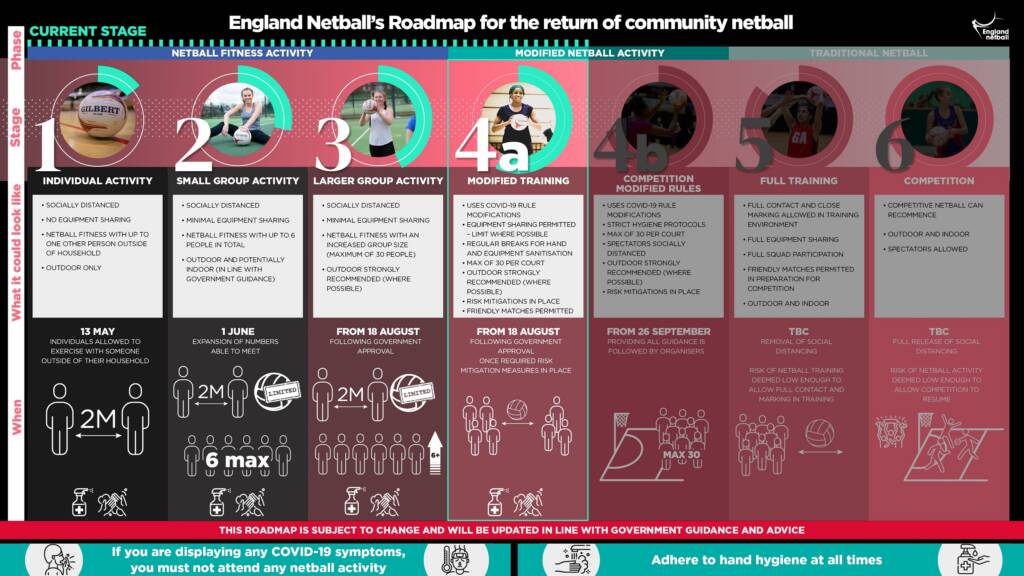 In July, the Government announced that team sports could return if governing bodies submitted an action plan to comply with a framework of risk mitigations. As part of this framework, sports were required to analyse the traditional versions of their games and assess the number of instances where players came within 1m, face to face for three seconds or more. These instances represented ‘increased risk’.

Unsurprisingly, due to the nature of netball, match analysis concluded that these type of ‘increased risk’ instances were common in every level of netball and across every position on court. The very nature of the current netball rules mean that players are regularly breaching social distancing with the 3ft mark (0.9m) and the often static nature of the game when the ball is shot multiple times resulting in players being face to face for longer than three seconds. Therefore the ONLY route to return the sport and ensure the safety of the Netball Family through lowering the risk of transmission was to impose modifications.

England Netball submitted a detailed plan to Government, which included analysis of the traditional and modified game, medical guidance and suggested temporary alterations to the game to lower the risk of transmission and allow the sport to achieve an accelerated return.

What are the modifications?

To meet Government guidelines, netball can only be played in line with the following rule modifications:

Despite the changes, the modified game still looks and feels very much like the version we know and love. Contesting for the ball is very much permitted providing players are involved in the phase of play. Over the coming weeks we’ll be providing hot topic videos and hints and tips on playing, coaching and officiating the modified game.

Activity must take place in groups of no more than 30 (including coaching and officiating roles) with regular breaks for hand and equipment sanitisation. Outdoor venues are strongly recommended (where possible). Activity is only permitted if risk mitigations are in place and netball organisations operate an ‘opt-in’ policy. Off court, normal social distancing applies and common netball behaviours that involve close contact including pre-match team huddles and high fives are no longer permitted. A number of other mitigations will also be introduced including mandatory Test and Trace completion and health screening before and on arrival at activity.

When can I start modified netball activity?

From today (18th Aug) players will be able to begin Stage 4a modified netball training as soon as their organisations and netball deliverers have fulfilled all mandatory requirements set out below. Programmes based on traditional rules including Back to Netball, Netball Now, Bee Netball and Para Netball may also resume in line with the modifications. Pathway activity is also able to return. Due to variations to traditional rules, Walking Netball and NETS may only progress to stage 3 of the return to community netball roadmap until further analysis is undertaken. More details around this can be found here.

From 26 September, Stage 4b of the Return to Community Netball Roadmap will be unlocked, at this point leagues and competition will be able to recommence, allowing planning time for league organisations and a vital window for pre-season player conditioning.

We know players are itching to get back on court but ask that you continue to be patient as clubs, leagues and programme providers require time to put the risk mitigation measures in place to protect you. In certain areas a return to training or competition might be delayed until later in the year due to facility access issues. We are working tremendously hard at a national and local level to unlock as many places to play as possible. Please note, in areas where a local lockdown exists, there may be a delay in progressing to stage 4.

What do I need to do?

Everyone involved in netball has a role to play in ensuring the safe return of our sport. To support the unlocking of Stage 4a. England Netball have developed comprehensive Restart Guidance and it is recommended that everyone involved in netball should read the guidance before recommencing activity. An enhanced support package is available for members and can be accessed via links provided in the email communication sent to all members on 18th August 2020.

All netball organisations are required to appoint a COVID-19 Officer and using the guidance available here, develop risk assessment and mitigation plans. All players are responsible for familiarising themselves with the game modifications and ensuring compliance with the risk mitigation plans issued by their netball organisation. Coaches will be supported to plan sessions in line with the guidance and prompt players to ensure continued adherence. Officials will play a crucial role in ensuring adherence in competition environments.

With Test and Trace measures in place, the government will be monitoring our progress. If transmission increases through netball, our sport could be required to move back to earlier stages of the return to community netball roadmap. It is imperative that the guidance is understood and followed. We are all in this together and now is our time to #RiseAgain.

Archive: Moving to Step Three of our netball roadmap

Archive: The return of netball