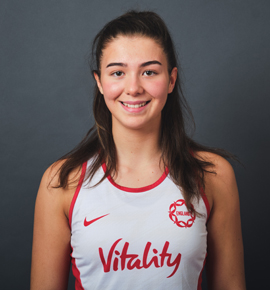 Yasmin Roebuck has gone from strength-to-strength since first being included in a Roses Academy squad for the 2018/19 season. The youngster started her international career with a tour of Australia and a Netball Europe victory with the U17 side.

Since then, Roebuck has travelled on a tour of Australia and New Zealand with the U19 side before starring in the Netball Europe U21 Championships, starting all three games in Worcester and securing a gold medal.

Roebuck plays for Vitality Netball Superleague franchise Manchester Thunder and will hope to continue her form ahead of the World Youth Cup in 2021 after being included in the long squad for the tournament.

England make it two for two at U21 Netball Europe

England get off to winning start at U21 Netball Europe