England Netball and The NFWI are delighted to announce a partnership that will see Walking Netball sessions provided to WIs across the country.

An open application period saw over 200 WIs express an interest in being part of this exciting project.

Walking Netball is a slower version of the game; it is netball, but at a walking pace. The game has been designed so that anyone can play regardless of age or fitness level.

The partnership will see England Netball trained hosts deliver Walking Netball programmes which will conclude with the training of WI members as hosts to allow them to continue delivering the programme in order to leave a lasting legacy.

We are proud that two nationally recognised and trusted female organisations have come together with a united voice and the potential to reach a significant proportion of the female population.

As featured on BBC Breakfast, this project is aimed at encouraging WI members to stay active and take part in a team sport which is fun, sociable and rewarding.

Additionally, the WI is committed to reducing loneliness and isolation and fully believes in the unique social benefits of this project.

England Netball CEO Joanna Adams, commented: “This fantastic partnership between England Netball and The NFWI demonstrates the commitment both organisations have in empowering women across the country.

“This project, funded by Sport England, will help to improve the well-being of thousands of women and we can’t wait to see WI members across the country get a wiggle on very soon.”

Lynne Stubbings, Chair of the NFWI, added: “We are delighted to be working with England Netball on this exciting project, and it is very encouraging that so many WI members have already expressed interest.

The feedback from the pilot sessions demonstrates what an inclusive and rewarding programme this is, with something for everyone regardless of age or ability. We are looking forward to seeing many more members inspired in the same way.”

The initiative will run for two years initially with nationwide sessions taking place from April this year.

Fantastic success has already been seen in pilot sessions, with the following testimonies;

‘The walking bit of Walking Netball was the big attraction – it took away the fear factor and I was pleased that I didn’t have to run.’

‘The first week we did it and I went home and a stomach ache and I thought I had strained myself, but I hadn’t – it was from all the laughing! It was great fun.’

‘I was quite seriously ill a couple of years ago and thinking about a way of getting back to fitness. So I came to Walking Netball and I’ve now started walking again as an activity. I never even thought about it – my muscles are loosened by the netball and then I’m off.’

‘The WI is a good body of people to draw from to play any sport. It makes you feel happy – it’s great fun. It’s given me a renewed interest in sport that I never thought I would have.’

The National Federation of Women’s Institutes (NFWI) is the largest voluntary women’s membership organisation in the UK. Now over 100 years old, it is more popular than ever before with membership levels standing at 224,000 and continuing to increase.

England Netball is the largest female team sport in the country with membership levels exceeding 100,000 and an estimated 1.4 million women and girls playing during a typical week within the netball season. 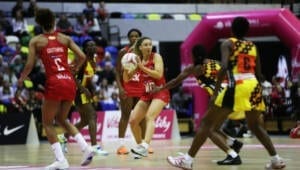