Run by Stonewall, an equality charity, the Rainbow Laces campaign is running its annual activation between 25 November and 12 December, with Rainbow Laces Day on 8 December.

The 2021 campaign encourages people to ‘Lace Up and Speak Up’; to wear Rainbow Laces at sporting events across the country in support of LGBTQ+ inclusion in sport, but to also speak with friends, family, colleagues, teams and clubs about the cause, to create a broader, louder and more impactful movement. 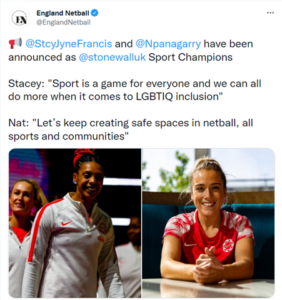 Francis-Bayman said: “Through my own personal experiences and engagement with others, I understand how incredibly important it is to have diverse representation in sport.

“My hope is that my confidence in being my authentic self and sharing my story with others, creates a platform for any minorities/person to feel that they can do the same.”

“I want sport to be a safe space for everyone to be whoever they want to be and embraced for that.”

At England Netball, we have an ongoing commitment to ensuring netball is a sport for all. In September 2021, we published our Diversity and Belonging Report to help improve diversity at every level of the game.

We look forward to celebrating LGBTQ+ members of the Netball Family this weekend and into the month ahead.