England Nets landed in South Africa on Wednesday morning as they embark on their World Indoor Netball Championships campaign.

Three teams made the trip and each will be aiming to make a seismic statement in Paarl.

Each have different aspirations but the Mixed side – made up of both women and men – might have the most ambitious as they aim to rise from fourth to first.

Fourth to first a real possibility

Nets – previously known as Indoor Netball – is still an emerging sport in the United Kingdom but has enjoyed a heightened level of interest in recent times.

This upward trajectory was perfectly epitomised three years ago in New Zealand when the Ladies squad managed to become world champions for the first time.

This triumph was noted by the Mixed side, who finished fourth in 2016, and a gold medal quickly became the aim for this 13-strong squad according to vice-captain Dayna Kosega.

“The Ladies team won the seven-a-side version at the last World Indoor Netball Championships, which was amazing and something we’re now aspiring towards,” said Kosega.

“The Mixed team have always finished fourth so we’re definitely the underdogs going into this tournament but I have real hope for us.

“It would mean the world to us to finish first. Coming from fourth place to winning gold, which is definitely possible, would just be so amazing and emotional. It’s a huge statement to make but I really do believe we can do it.”

Success in South Africa would represent the culmination of almost two years of hard work for the Mixed team, who began trials towards the end of 2017.

This new-look squad was announced last year and intense, regular training sessions in the Midlands have looked to highlight the obvious talent dwelling within the team.

“I want to say a huge thank you to all of our sponsors and the individuals who took time out to travel to Birmingham and Derby. We really couldn’t have prepared as well as we have without them.”

Kosega has previously won gold medals in this sport for Indoor Netball Trans-Tasman U18s Ladies in 2008 and the U21 side in 2009. After moving to England in 2017, she sees this winning mentality in this current crop of players.

“I love our team. We have people who can play everywhere. Our defence is amazing, we have good shooters and I think we are going to do really well this year,” she said.

“I think we’re very solid. One of our strengths is that we’re sort of unknown going into this tournament. We know how the other countries play but they don’t know exactly what we’re bringing, which is going to be different to the other years.”

New Zealand all too familiar for Kosega

England Nets Mixed will play eight matches in the six-a-side category and will then, following one day of rest, follow an identically intense schedule in the seven-a-side discipline.

The four nations converging on Paarl are hosts South Africa, England, Australia and New Zealand. Originally deriving from New Zealand, vice-captain Kosega is all too familiar with the threat the Kiwis and Australians pose.

“The Australian Mixed side is very quick. They are a flawless team because they do the basics very well and that’s what works for them. They get the ball down without fault so it’s very hard to force turnovers. Going up against them previously, they always have very strong shooters,” she said.

“With the Mixed side, New Zealand have won it almost every time so we have definitely focused a lot of our training on playing them. They play completely different to Australia; they play slower and are smart about their choices rather than the speedy game that Australia play.”

They face Australia in their opening game in the six-a-side stage of the tournament and Kosega is keen for her side to show what they can do.

“We’ve put in so much time and effort, and I think that’s really showing. We’re just really excited to play. It is hard being new to the team but I think everyone has a feeling that we have a really good chance.”

The World Indoor Netball Championships is the second major international netball event of the summer following the Vitality Netball World Cup in Liverpool.

The event proved to be a huge success for world netball and Kosega believes the Vitality Netball World Cup can have a positive impact on Nets in this country.

“We can definitely benefit from the success of the Vitality Netball World Cup especially now that Nets is under England Netball. Just having everyone excited and engaged in the sport itself will definitely improve the engagement for Nets. The timing is perfect and I hope that times like this will help in the future.” 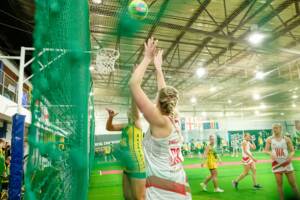 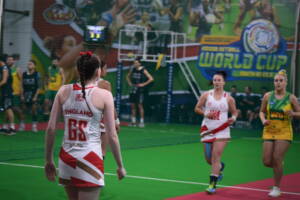