Jo Harten is back in the Vitality Roses squad for the first time since the team secured bronze at the Vitality Netball World Cup 2019.

A lot has changed in two years with new faces – both players and coaches – and the impact of COVID-19.

With a sold-out Copper Box Arena to look forward to at the start the three-match series against the Jamaica Sunshine Girls, Harten is relishing the opportunity to pull on the red dress again.

She said: “It feels like it was just yesterday we were at the Vitality Netball World Cup 2019.

“I think having the break after the World Cup to go back to Australia and focus on my domestic season with the GIANTS was something I’d always intended to do.

“Then the world changed with COVID-19, didn’t it? It was just so unexpected obviously and that extended my break from the Vitality Roses programme, extended any kind of absence I had from even coming back to England to see family and friends as well so it’s definitely good to be back.

“It’s nice to catch up with everyone, it’s nice to meet new squad members and it’s just nice to be back.”

Harten admitted that while she was excited to reunite with the team and get to know the new faces, there were a few nerves. 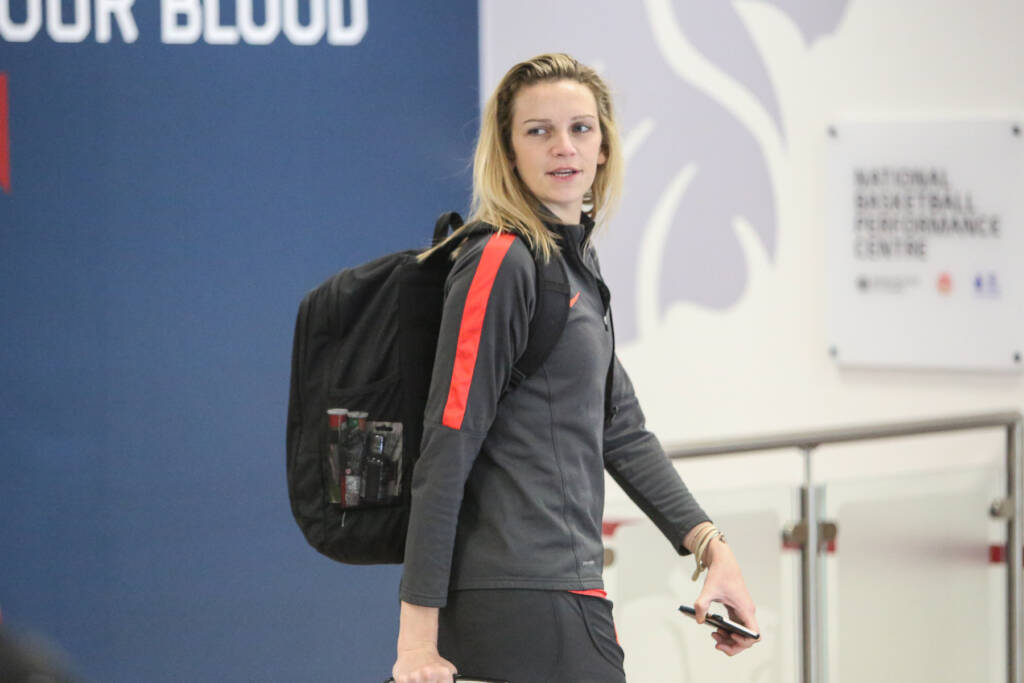 She said: “I actually felt really nervous going into Hatfield for that first day of camp.

“Looking around the room, I knew everyone’s face and I knew everyone’s name but some people I hadn’t even had a conversation with due to not being here, but I’d seen them play in the last series over in New Zealand and I’ve seen the messages in the WhatsApp group as well.

“It definitely took me a couple of days to get used to the new look of the group but straightaway I felt welcome and really excited about it all.

“I think [connections] on court [are] going to take a bit of time just to, I guess, get back into the swing of things with people I’ve played with before.

“With the newer members of the team or people I haven’t played with for a while, I think it’s just about learning how each other play.

“We’ve already had a couple of training sessions and quite a lot of match play so it’s just all about experiencing each other and using that kind of learning process for the next few weeks.”

In addition to new teammates, Harten also returns to a different coaching setup but there are several familiar faces.

She said: “I last had Jess (Thirlby) as a coach when I was in the U21 England World Youth Cup team back in 2009 so it’s kind of coming full circle for me in my England career there.

“I’ve always respected Jess as a really good coach and I feel like I know what page she’s on in terms of like her tactical sense which is really nice.

“She’s definitely got a new approach to running this England team, which I think is really refreshing and really cool.

“Then Sonia (Mkoloma) as the Assistant Coach is obviously my ex-teammate from a few years back and I played with her for about 10 years.

“I think they’re a really good mix and blend and I’ve really liked what I’ve seen so far.”

Harten made her Vitality Roses debut against Barbados in 2007 and notched up her 100th cap when she stepped onto court against the Uganda She Cranes at the Netball World Cup in Liverpool.

With 107 caps currently to her name, she’s one of the team’s most experienced players and acknowledged that while the same feeling of joy is still there when you discover that you’ve been selected, expectations have heightened over the years.

She said: “It doesn’t lose that sense of excitement when you see your name [on the squad list] but there’s definitely an expectation on your shoulders when you do see your name and you know, you’re one of the experienced players so I feel like seeing my name in that list a couple of weeks ago in Australia was really quite exciting.

“I guess it’s just as you get older, you appreciate things a little bit more and you appreciate the experiences that you’re still working hard for but you know you’ve been given so definitely kind of a mixture of excitement, nervousness but overall eager and keen to get back to business.”

Back in the UK and back in red! Long time coming, looking forward to the next few weeks with this group 🌹 https://t.co/wE1uexJOAP

The Vitality Roses have got the better of Jamaica in major competitions in recent years.

England came from behind to secure a last-gasp 56-55 victory over the Sunshine Girls to make history and progress to a Commonwealth Games final for the very first time in 2018 then beat Jamaica again the following year during the Vitality Netball World Cup 2019.

With a strong Sunshine Girls squad named, Harten is looking forward to seeing how the Vitality Roses match up against them.

She said: “I think obviously they’ve got some threats up and down the court but on an individual level, I do really think it’s about bedding down the Vitality Roses style of play.

“For myself, having not been a part of the last few test series, it’s about getting back in and seeing what works really well for us against a world-class opposition. 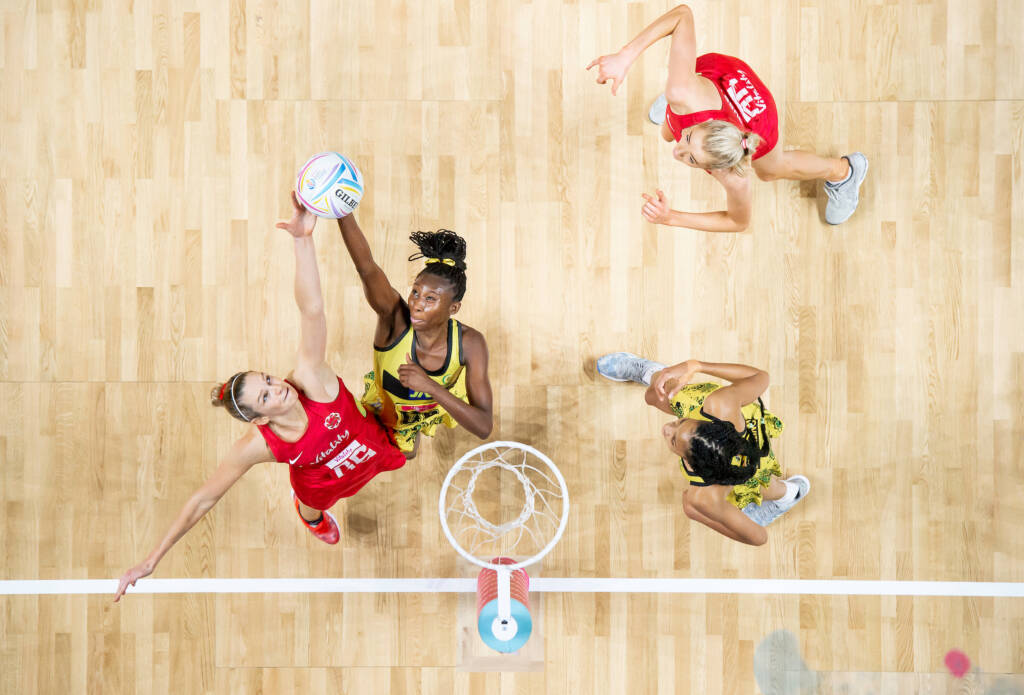 “But then just always having in the back of your mind that Shamera (Sterling) is going to come out for every intercept, Jhaniele (Fowler) is probably going to score 50 goals and that’s ok as long as we have the goods to combat it at both ends and a really strong mid-court.

“You know, they’re a team full of amazing athletes, they’ve got flair and they’ve now got quite a bit of experience up and down the court so it’s going to be a good match-up and definitely a good series.”

The year ahead is massive for netball in England with the return of fans to arenas, a first Netball Quad Series since 2019 and a home Commonwealth Games in Birmingham.

The Vitality Roses will be out to defend their title in July 2022 but for Harten, the focus for now is laying the foundations.

She said: “I think definitely for me it’s about one tour at a time.

“I think there’s so much that can change between now and Birmingham – in the world even, I think COVID-19’s taught everyone a really good lesson and you have to take each day as it comes and kind of just adapt as it goes.

“Every time you get under that 12-month countdown, I think it’s always about building for the next major competition, but you can’t ignore the little foundations, which are like the test series.

“I think it would be hopefully a series win against Jamaica and just some foundations and pieces of the puzzle that have been laid.

“You know we don’t have to be perfect straightaway and I think it’s definitely about building into the Commonwealth Games and the squad will also be looking to build into the World Cup the year after.

“So I think laying those foundations is a really strong positive for us and I think if we come out of this series smiling, we’ll be onto a good winner.”

Affectionately known as the team’s eighth player, Harten can’t wait to step out on court and hear the roar of the Netball Family.

She said: “It’s really exciting to be back firstly in London then we go up to Nottingham and I’ve got a really soft spot for the Midlands. 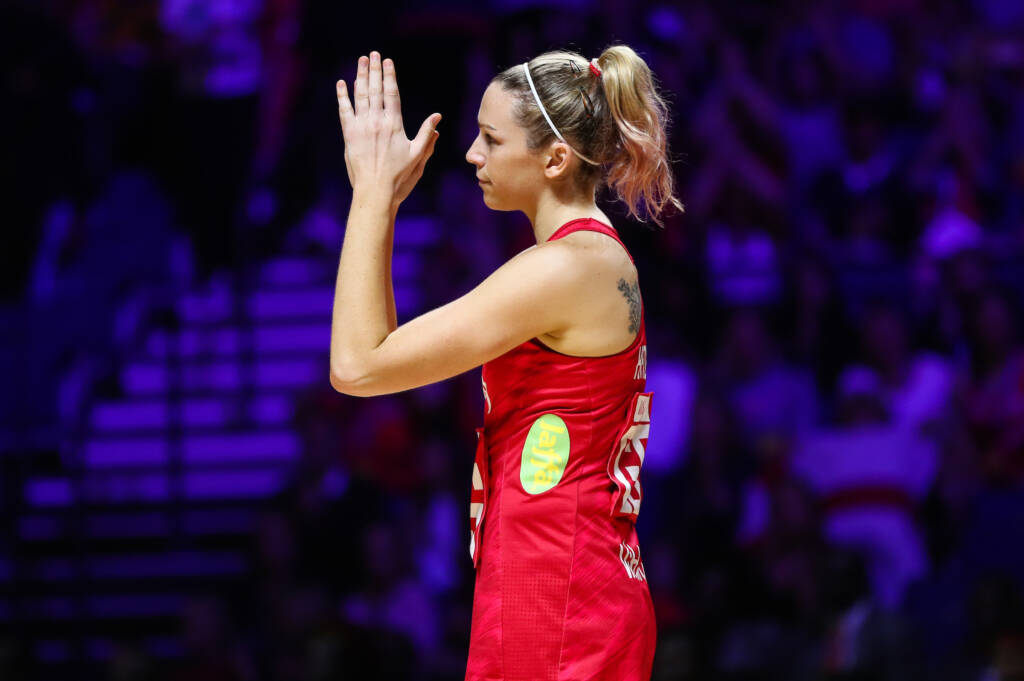 “You know the fans in this country have had it tough in terms of spectating women’s sport for at least the last 12 months so it’s going to be a bit of a spectacle I think – hopefully, we can put on a good show!”

When the Vitality Roses and Sunshine Girls step out onto court in London and Nottingham, they’ll be joined courtside by six mascots acting as flagbearers.

Upon hearing the news that an incredible 462 junior England Netball members were nominated for the once-in-a-lifetime opportunity, Harten said: “That’s an awesome number of applications.

“I think it’s always great when you know and you feel like you’re inspiring even one person, I think that’s a really great feeling.

“I think for us it’s definitely about momentum. We created a bit of history back in 2018 winning the gold medal (at the Commonwealth Games); the girls have just created a bit of history out in New Zealand winning a first series away over there, so I think why not try and inspire as many people – young girls and boys – as possible to reach for that next level?

“I think it’s a really nice kind of platform to do it on in a home competition against a classy side like Jamaica.

“I think it’s really important that we spread the good word of netball, especially ahead of a home Commonwealth Games because I think it could be a really exciting next 12 months.”

It’s not too late to be part of the action with tickets still available for the Nottingham Motorpoint Arena dates here.

Vitality Roses Reunited Series
Previous Story Introducing England Netball’s new look
Next Story Serena Guthrie: “Everything that we do is a lot larger than just stepping out on the court”