Leeds Rhinos Netball have been granted a license to join the Vitality Netball Superleague from the 2021 season.

Leeds Rhinos Netball was launched in 2017 with the ambition to become a Superleague franchise. In 2018, it was awarded the England Netball Pathway for Yorkshire and entered an U19 team into the national league, with approximately a further 180 athletes involved in the community programme delivered across the region.

The Vitality Netball Superleague has gone from strength to strength with average match day attendance and TV audiences growing year on year. Over 5,500 fans filled the Copper Box Arena in London for this year’s Grand Final.

Since it launched, Leeds Rhinos Netball, which is self-funded, has delivered training hubs, camps and workshops under the guidance of Director of Netball, Anna Carter. This year their U19 team came fourth in their first ever season in the National League and the Rhinos’ Netball Academy now has approximately 180 athletes.

Commenting on the news that Leeds Rhinos Netball had been granted a Superleague franchise from 2020, Carter said: “We are delighted with this news. It follows lots of hard work from a lot of people delivering our programmes and working on the application.

“Superleague is the icing on the cake and we can’t wait to play our part in the competition. We know that the time will fly by and the lead in will give us an opportunity to plan well for a successful entry into the league. Thank you to everyone who has helped.”

Leeds Rhinos Netball is part of the Leeds Rhinos sporting family which incorporates the men’s, women’s and Wheelchair Rugby League teams and now the netball side.

Gary Hetherington, chief executive of Leeds Rhinos said, “We’re delighted with what Leeds Rhinos Netball is delivering. We launched in 2017 with two clear aims – to deliver some great netball programmes and to secure a Superleague place. The growth in the programmes is incredible and down to the hard work and dedication of the Leeds Rhinos Netball team, the majority of whom are passionate volunteers.

“There is a lot of synergy between our sports with the strength of Rugby League and netball coming from the grassroots of the game. Through the work of the Leeds Rhinos Foundation we are able to use sport to inspire people, young and old, to get active and involved in sport and having netball as part of that offering is a major boost to the opportunities we can offer.

“This news is well timed, building on that success and giving Leeds Rhinos Netball time to plan towards the first Superleague game in 18 months’ time. In Anna Carter, the club has an outstanding coach and sport administrator and it has been great to see her as part of the Leeds Rhinos family sharing ideas and best practise models with all our coaching staff.”

Leeds Rhinos Netball will play their home games at a range of venues, including Leeds Beckett University, Sheffield EIS, and the First Direct Arena, with the ambition for a new indoor venue in the medium term in the city of Leeds.

Mark Evans, chair of the VNSL Board, said, “Leeds Rhinos Netball submitted a very strong and comprehensive bid across all areas, we are delighted to have such an established brand on board as we strive to professionalise and commercialise the game at club level.

“2021 is not that far ahead and it will give the Rhinos vital time to prepare to mount a challenge from the outset. I am delighted that Leeds and Yorkshire will soon have elite club netball back to inspire and excite the growing number of netball fans from all over the region.”

Peter Mackreth, Dean of Carnegie School of Sport at Leeds Beckett University, said, “This is great news for the Rhinos, for the city and beyond, and for universities. Here at Beckett, we are really looking forward to extending our partnership with Rhinos and supporting netball. It is also great for schools and community netball to have local role models to aspire to and great games to watch.

“Having elite level sport in Leeds is a great attraction for potential students across the country and overseas and we would like to congratulate Leeds Rhinos Netball on gaining their place in the Vitality Superleague.”

Judith Blake, Leader of Leeds City Council, said, “This is great news for women’s sport, the city needs top flight squads and players to drive participation and spectating. I know that Leeds Rhinos Netball have worked hard to secure this and we will be working with Rhinos on an indoor venue.”

Leeds Rhinos Netball will play their first game in the early part of 2021. In the meantime, they will continue to compete in age group national competitions as well as extensive Hub programmes right across Yorkshire, while also delivering coach development. This summer, netball is set to take centre stage once again with Liverpool hosting the Vitality Netball World Cup and England aiming to build on their Commonwealth Games gold medal.

Make sure you’re following @NetballSL on Twitter for the latest Vitality Netball Superleague news and updates! 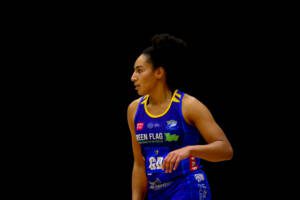