The England dress, which has been crafted with athlete performance in mind, has been designed to represent the explosiveness and dynamism of the players who will wear it. This netball dress also demonstrates the speed and impact of the sport as it’s seen today. Long gone are the days when netball was seen simply as a school girl’s sport. 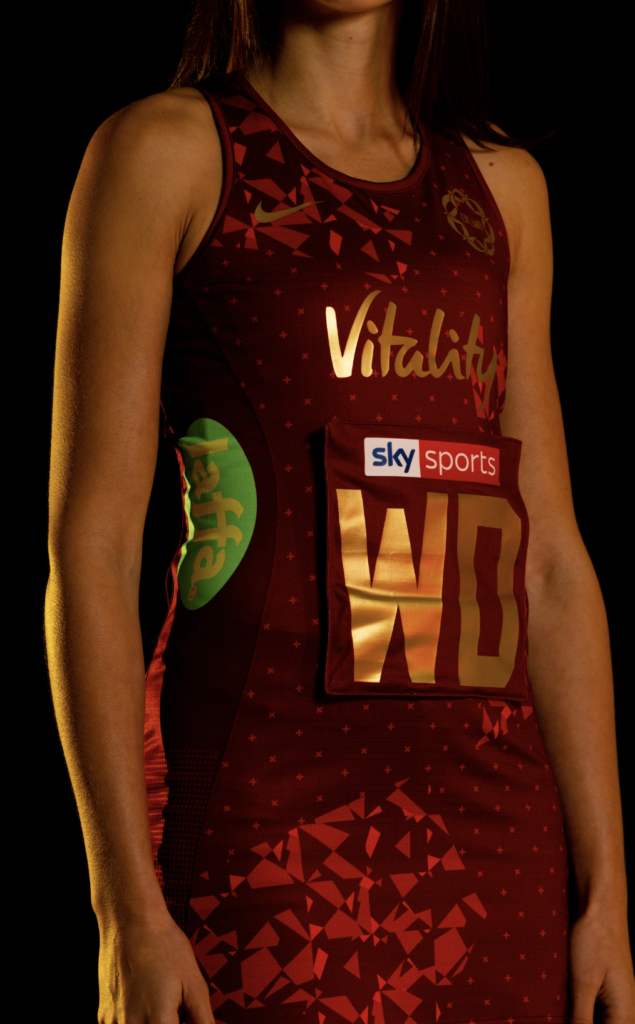 Nike, which is approaching its third year in partnership with England Netball, have incorporated a tonal geometric pattern throughout the dress which is meant to reflect the explosive movements of the game. The kit consists of beautiful red and gold tones to reflect the team’s home colours, whilst a strong patriotic message runs throughout with subtle St George’s crosses.

The Vitality Roses squad will have a fully gold crest on the dress, compared to the white and gold option that is seen on the fan range. This is due to fact that the gold crest has to be earned at the elite level, instilling a sense of pride and aspiration to it.

In addition, the vibrant fan range, which is now available on the England Netball Store, includes highly anticipated replica products as well as leisurewear, from replica training tops and tanks to leggings, bags and caps.

Vitality Roses Head Coach Jess Thirlby commented: “I am delighted that fans are now able to see this phenomenal new Vitality Roses kit and fan range. A lot of work has gone into developing this range and it wouldn’t have been possible without all the time, detail and thought Nike put into making a kit that truly represents not only the Vitality Roses, but the sport as a whole.

“Wearing the red dress is such an honour for any netballer and I know the Vitality Roses will be itching to get out on court in this new kit to represent their country.

“The fan range has also exceeded the expectations of the team and we’re all keen to see the Netball Family wearing it in the crowd again when fans can return to arenas, because witnessing a sea of red and white when you step out onto court is a fantastic feeling. We hope netball fans love the kit as much as we do. It’s great to be able to get excited about something like this after the year we’ve all had, so I’d like to thank England Netball and Nike for making this happen.”

The multi-year deal with Nike has seen the global brand continuously deliver apparel across the England Netball landscape at every level, from umpires to aspiring young players taking their first steps at county level. Plus, Nike recently launched the HyperSet; its first indoor court shoe which supports netball.

Head to the England Netball Store here to check out the new fan range available now.