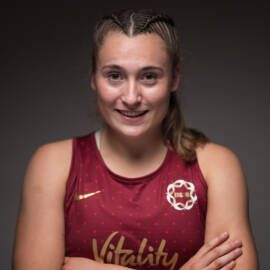 Ella Bowen first earned a spot in the Roses Academy at just 15 years of age.

The defender was part of the squads that won U17 Netball Europe in early 2019, where she vice-captained the side, and U21 Europe Netball in 2021.

Competing for Loughborough’s U19 side in 2021, Ella was named the league’s Player of the Season as Lightning won the title.

She then received her first Vitality Netball Superleague call-up from Loughborough Lightning, being named in their squad ahead of the 2022 season. She also plays an important role for Premier League 2 side Charnwood.