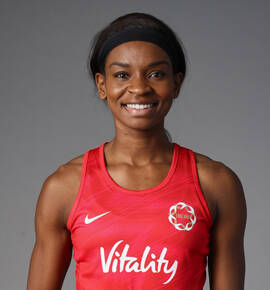 At 27, Jodie Gibson brings a wealth of elite experience to the Vitality Roses having represented her country on 25 separate occasions and at major international tournaments since she made her debut in 2013 against Jamaica.

Strong performances at Netball Europe and the Malawi series, where she played every quarter, in 2017 meant that she was certain for selection for the 2018 Commonwealth Games where she won a gold medal in historic tournament which ended in a final victory over Australia at the Gold Coast.

After troubles with injuries following the Commonwealth Games, Jodie sadly missed out on the 2019 Vitality Netball World Cup but did return to the fold as she was named in the Cadbury Netball Series squad to face New Zealand in 2020.

Jodie balances her national team commitments with her Vitality Netball Superleague (VNSL) side. She currently dons the black dress of Saracens Mavericks after she joined from Severn Stars for the 2020 season.

The defender, who was Stars’ first-ever signing, has also represented Loughborough Lightning and Manchester Thunder in the past.

Jodie has been selected into the 2020-21 Vitality Roses programme via the P1 route.