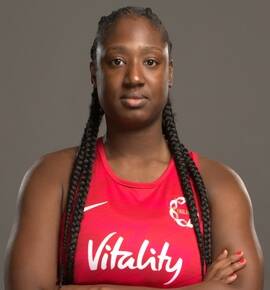 Kadeen Corbin started playing netball at the age of 12 and, 16 years later, has gone onto enjoy a prosperous career in the sport that has seen her represent her country and various club sides at the highest level.

Kadeen has amassed more than 70 caps for the Vitality Roses since her debut against New Zealand back in 2011. The attacker has also worn the red dress at major international competitions over the years including the 2014 Commonwealth Games in Glasgow and the 2018 Commonwealth Games in Australia.

She showed great determination to rejoin the group on the Gold Coast after an injury prohibited her from being selected for the Netball World Cup in Australia three years earlier. Kadeen played a key part in the team that won the historic gold medal against the hosts; her and her country’s first major honour.

Since, she has become a key member of the squad following the appointment of Jess Thirlby as Head Coach. Kadeen has featured in the shooting circle at the South Africa Series in 2019, the Vitality Netball Nations Cup in January 2020 and the Cadbury Netball Series later that year.

The iconic attacker is currently enjoying her second stint with Saracens Mavericks in the Vitality Netball Superleague alongside sister Sasha. She had previously played for Team Bath and Mainland Tactix in New Zealand for the 2017 ANZ Premiership season.

Her return to the VNSL saw her score almost 350 goals for Team Bath with 85 per cent shooting stats during the 2018 season.

Kadeen has been selected into the 2020-21 Vitality Roses programme via the P1 route.

Vitality Roses in Focus: VNSL 2022 Round One