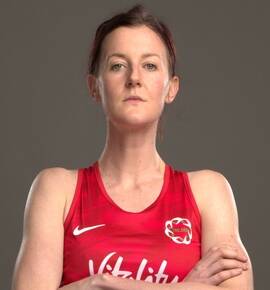 Kate Shimmin is an Australian-born defender who was selected for the full-time Vitality Roses programme in August 2019 and again a year later. She qualifies to play for England through dual citizenship.

The defender, who grew up in the northern suburbs of Adelaide, began conversations with Tracey Neville about putting her hand up for selection by the Vitality Roses and was later named in Jess Thirlby's first squad.

Kate made her debut in a red dress during the South Africa Series towards the end of 2019. The 28-year-old watched the first two games from the bench but started the third as England went onto win the series.

Just months later, Kate got the opportunity to play in front of a home crowd for the first time when she featured in the Vitality Netball Nations Cup. Under Thirlby, she played in all four games including the bronze medal match.

Kate plays her netball out in Australia for Sunshine Coast Lightning. The defender joined the Queensland outfit for the 2021 season after she left Adelaide Thunderbirds, where she won the club's Player of the Season award in 2018.

She had represented the Thunderbirds for seven seasons in total from 2011 to 2020 with with one year at cross-state rivals the Queensland Firebirds in 2017.

Kate has been selected into the 2020-21 Vitality Roses programme via the P2 route.