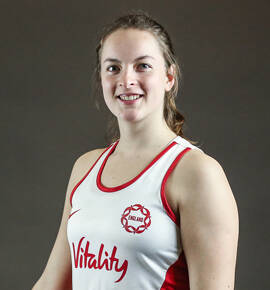 Rachel Fee was first brought into the international scene when she joined the Roses Academy squad for the 2018/19 season.

The defender has since toured Australia and New Zealand with the U19 squad, won the Netball Europe U21 Championships, and has been selected for the U21 long squad for the World Youth Cup in 2021.

Fee currently plays for Vitality Netball Superleague franchise Team Bath and, after two seasons with the U19 squad, played for the U21 side at the NPL Tournament for the first time in 2019.

She was one of the 20 players included in the U21 long squad for the World Youth Cup set to take place in 2021.

Athletes selected for England U21 squad for 2021