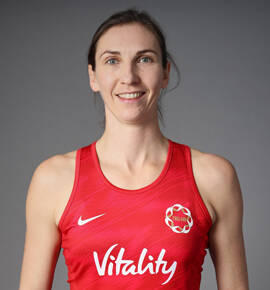 Rachel Dunn is one of the Vitality Roses’ longest-serving players having debuted for the national team in 2004 against South Africa. The goal shooter has since gained more than 90 caps since then despite never playing full-time; opting to balance elite netball with her career as a genetic technologist for the NHS.

Dunn has also travelled to multiple tournaments with her country. The veteran was a member of the team that won bronze at the Commonwealth Games in both 2006 and 2010. She also won silver 2010 World Netball Series.

The 37-year-old was selected for a Vitality Netball World Cup squad for third time in 2019 after appearing at the 2011 and 2015 editions of the tournament. Under Tracey Neville, Dunn won bronze for the third time at the M&S Bank Arena in Liverpool.

Domestically, Dunn is one of the most recognisable faces in the Vitality Netball Superleague having been playing at the elite level since the division’s inception in 2005. She has since made more than 200 league appearances for the likes of Team Bath, Surrey Storm and Wasps Netball.

Dunn’s talent and coveted longevity has allowed her to win a record seven VNSL titles as a player with the most recent coming with Wasps in 2018. She will aim for an eighth title after being included in Wasps’ VNSL squad for the 2020 campaign.

Where it all began: Rachel Dunn

Vitality Roses off and running against Uganda

Rachel Dunn: “England and South Africa have had some great battles”