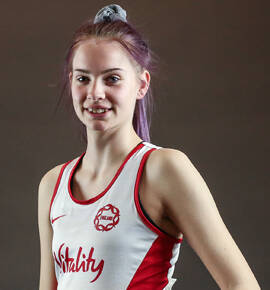 Shelby Harris has been proudly representing her country since she was selected for U17 Netball Europe in 2017.

Harris won that competition in Northern Ireland and was then listed as a reserve for the U21 tournament a few months later, something she cites as one of her biggest achievements.

The shooter was once again selected for U17 Netball Europe in 2018 before being selected for a tour of Australia in the same year.

Harris has previously captained Surrey Storm's U19 side in the National Performance League and currently represents Weston Park Blades in the Premier League.