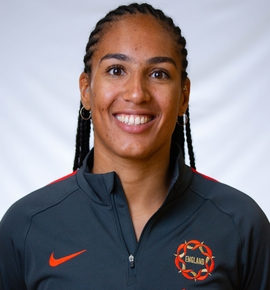 Vicki Oyesola made her debut for England’s senior side, the Vitality Roses, in a 61-48 victory over Scotland at Netball Europe in 2017. She has since gone onto win three more caps for her country and won that same Netball Europe tournament in Cardiff.

The defender was subsequently selected in the squad for the home series against Malawi and made the Roses A side to face Scotland during the Uganda series a year later.

On the domestic scene, Shaw has represented both Saracens Mavericks and Loughborough Lightning. The Loughborough University Mechanical Engineering student is making waves for her current side.

She has become a defensive powerhouse for the team in purple, collecting the VNSL Young Player of the Season Award in her debut season. In the Vitality Netball Superleague, Oyesola plays alongside Natalie Panagarry, Jessica Shaw and Ella Clark.